Kim Chiu says showbiz is a small world and she, Gerald Anderson and the girls involved with him will eventually run into each other. 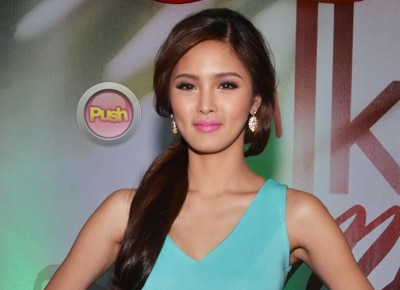 At the press conference of new teleserye Ikaw Lamang, MJ Felipe reported on Bandila that actress Kim Chiu was urged by the media to react on the pictures circulating around the net of her and ex-boyfriend  Gerald Anderson, working together.

Apparently this is for a photo shoot for a current endorsement they both have. (Read details of that article HERE)

As for a viral video of Maja Salvador and Sarah Geronimo hugging behind her during a program, Kim said she doesn’t want to make an issue out of it. Maja is Gerald’s current girlfriend and Kim’s former best friend while Sarah was also previously courted by the actor.