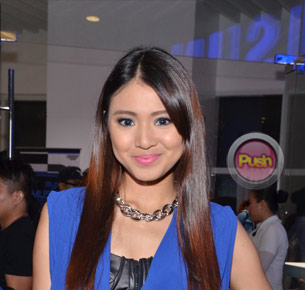 Nadine Lustre remarked that she is actually flattered to be compared to Kathryn Bernardo. Netizens have been commenting that both stars look alike.
“Ako naman kasi with that issue, I'm actually flattered pa kasi Kathryn we all know naman na she's beautiful, she's gorgeous and she's pretty famous right now. So ako parang okay lang kasi to be compared with someone like that di ba it's very flattering? Well ako naman kasi I don't get affected by it, iba naman si Kathryn, iba din naman ako. siguro it's just the some features that are hawig,” she said in an interview with Push.com.ph.
The upcoming Ang Diary ng Panget star underscored that she’s okay with the comparison. “A lot of people tell me that siguro I kinda do na some of my pictures din with the angles kasi meron nga ‘yung sa mga angles ko may nagsasabi minsan Kathryn Bernardo so I don't know, I'm okay with it though.”
With her launching movie set to hit theaters this April 2, Nadine said that she’s already excited about it. She admitted though that she had doubts at first if it would be well-received by moviegoers. “It’s very exciting because I mean this is my launching movie so I don't know how it's going to turn out kasi parang di ba fresh face, new face so parang I was scared at first,” she relayed.
She was glad to have heard positive feedback since the trailer was released. “I was very nervous kasi baka sabihin ‘Ang dami namang artista diyan bakit pa bago ang ginamit nila?’ But then all the fans kasi since they know the book parang positive naman yung reaction nila sa amin ni James (Reid) so right now I'm more of excited,” she said.
Nadine shared that she had fun working with James Reid, her onscreen partner in the movie. “It was fun kasi si James naman maaalam naman siya he's very chill and very cool. Masarap siyang kasama,” she relayed.
Celebrity