Jones admits she is excited to finally tie the knot in May. 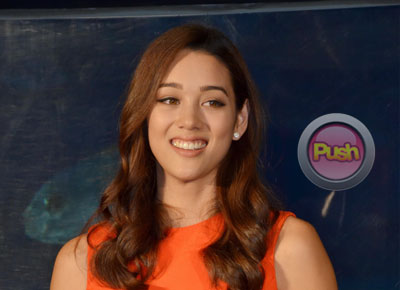 After getting a proposal last year while attending service at Victory Christian Fellowship, Kim Jones admitted she can't wait to finally become Mrs. Jericho Rosales. “Things are going really, really well. I’m actually really excited just for the planning to be over because I’m just not a wedding planning kind of girl (laughs). I’m just excited just for it to be the morning of the wedding already,” she shared during her launch as the newest brand ambassador of international skincare brand Neutrogena. Kim and Echo's wedding has been set for May 1, Labor day which is also a national holiday.
Kim shared that even before Echo proposed, they both knew they were leaning towards a laidback kind of wedding which is why they chose a beach venue with no specific theme in mind. “It’s going to be at the beach, but there’s not going to be a theme as such. We just sort of want it to be like a party with our closest friends and family and people who we look up to as a couple and individually. So it’s just going to be fun. We’re just going to have games and stuff, it’s just going to be a nice weekend away for people at the beach,” she revealed.
The Fil-British beauty who was raised in Australia said she never thought twice about saying yes when Echo finally popped the question. “When he proposed, we had been talking about it for months. The thing is, I got into this relationship with the idea of marriage. I was ready for it. But all the more it just grew, even when we started dating and we got to know each other more. I already knew he was my soul mate. It really was a no-brainer. I knew when he asked me that it was the right timing, it was perfect setting, everything,” she shared.
The lifestyle show host said the more she has gotten to know Echo, the more she fell in love with him. “There was no specific point like I just knew he was the one. I think when you fall in love, for me it was very gradual. You have to go through the good times and the bad to sort of know someone really inside and out. So there was no really defining moment, it just sort of gradually happened. You know the more we’re open about it and we talked about it, that’s when we sort of knew we were made for each other,” she said.
After dating for more than two years, Kim said nothing much has changed with how she and Echo are with each other. “Personality wise, we’re the same. We haven’t changed. We’re just more aware now that we are sort of we’re a team now, going into this wedding and into the succeeding marriage. We sort of have to sacrifice our independence a little more and put in a lot more compromise. Because I’m very independent so for me that’s something that it’s a little hard to carry off, sometimes Echo is like, ‘Let me handle it, let me help you,’ and then I’m like, ‘Oh right, we’re a team now.’ It’s important that we’re strong together and we have that foundation. Even in terms of our careers and what we want to achieve, nothing’s going to change. I think there’s a common thought that when we get married, we’ll settle down and have kids right away and then that will be the end of our careers. But we’re really more on fire about our careers, we’re so inspired that we’re each other’s inspiration,” shared the Neutrogena beauty.
The bride-to-be also shared what quality she saw in Echo that made him stand out from all the other guys she has met and convinced her that he definitely was “The One.” “I love way he makes beso to people that he’s only met once. He treats everyone like they’ve been friends for many years. He has just a selfless and genuine heart, such a giving man. He’s the kind of guy that makes you want to be better. That was a big part of why I fell in love with him,” she said.
Celebrity