Khalil Ramos on Julia Barretto's new show Mirabella: ‘I believe she deserves it’

Khalil Ramos admits he and Julia Barretto have a closer friendship now. 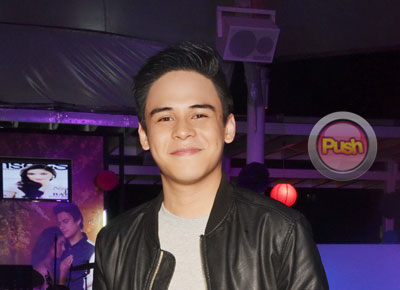 After his US vacation with family last December, Khalil Ramos said he is looking forward to another busy year in showbiz. “Galing ako ng States kasi I spent Christmas and New Year there. I entered 2014 in the States where I was on vacation with my family pero so far it has been great, it was a good kickstart to my year. I’m happy and I’ve got a lot of stuff ahead of me and I’m just so pumped,” he shared while attending Julia Barretto's 17th birthday salubong last March 9.
Khalil, who along with Julia is part of Star Magic Circle batch 2013, said he first got to know the young actress before the Star Magic Ball last year. The 18-year-old singer-actor said he was happy to hear that Julia's launching project Mirabella was finally going to be aired.
“I’m very, very proud of her. She’s gone a long way, she has a show now. I know she’s been waiting for this for a long time na, dati na kasi kaming magkakilala ni Julia. We’re so close. If you guys are asking about our closeness, we really are very close, we met almost three years ago. We first met sa dance rehearsals ng Star Magic Ball. And wala pa siyang endorsements nun kasi she was still in school. Ako naman I was doing Princess and I, we became friends and we became close and I’m so proud of her na sobrang dami na niyang endorsements and I believe she deserves it kasi she’s so hard-working, she’s so passionate and she just loves everything that she does. I’m very proud of her,” he shared.
This year, Khalil said he still plans to become an even better actor and is looking forward to a different kind of project this year. “Sa mga nagtataka kung bakit wala na ako sa Annaliza, kasi before I went to the States, my character in the show went to the States, too. I’m doing a film. It’s something different because I’m going to do action. Wala pa naman, we haven’t started yet, it’s still [in] ongoing discussions and meetings that we still have to sit down on but hopefully matuloy,” he said.
Even after joining showbiz via Pilipinas Got Talent in 2011, Khalil said he is continually challenged to become a better actor. “No, I couldn’t say that it’s easier kasi I’ve been acting for two years pa lang, I still have so much more to learn. I’ve been working with super great directors for the past two years and I’m very thankful sa mga nabibigay sa akin na mga opportunities to showcase what I got on the screen. Now I’m learning more, exploring and I can’t just stick to one role, I need to expand as an actor,” he admitted.
Khalil said he is looking forward to his fans seeing him as more than just someone with a boy-next-door image. “People know me as the mabait na best friend dahil sa Princess and I and Annaliza so medyo na-typecast ako na parang best friend. I’m 18 now. I entered Princess and I 15 pa lang ako nun and of course I want to explore naman everything. I’m definitely focused on my acting. I want to explore more roles and more of everything. I want to learn more. I’m still working on my singing, hopefully this year I might release another album. Mga die-hard supporters ko, maasahan niyo that I will give my best this year,” he said.
Celebrity