The UKG host was surprised by the basketball cager with a proposal at the airport. 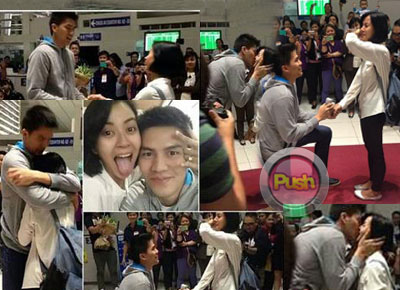 Umagang Kay Ganda host Bianca Gonzalez could not contain her happiness on her Twitter account as her boyfriend JC Intal went down on one knee and proposed to her at the Ninoy Aquino International Airport Terminal 2 this morning. Bianca was waiting for her flight to London.
"My twitter mentions EXPLODED!!!!! I had to get wifi on the plane kundi mababaliw ako mag isa!!!! Hahaha!!!! Aaah thank you everyone!!!!!," Bianca tweeted.
The event was witnessed by JC's parents, close friends like couple Cheska Garcia and Doug Kramer, and other passengers who were very touched by the Barako Bulls player's sweet gesture.
"So we all woke up extra early to witness #TheProposal! @jcintal7 finally purposes to@iamsuperbianca before she leaves for London! Congratulations guys! Of course she said yes! :)" @dougkramer44 tweeted. Cheska posted a photo of the couple as well.
Many netinzens also congratulated the couple
"Thank you for the early good vibes! ?? Congrats @iamsuperbianca @jcintal7! ?? #theproposal #jc&b," posted @JezOlores
?"My favorite showbiz couple got engaged!! Congrats!!!" tweeted @wannaJoe20
"My mom & I are gushing over @jcintal7 & @iamsuperbianca's engagement ?? One of the sweetest & cutest proposal ever! ?" said @reyesclaryxx
Bianca and JC's engagement is the fourth showbiz engagement announced this year. First announcement came from actress Karylle and Yael Yuzon (who will be getting married this Friday), followed by K's fellow Showtime host Jugs Jugueta's proposal to non-showbiz gf Andie Aguirre. Singer Yeng Constantino and beau Yan Asuncion also recently confirmed their engagement.
Bianca and JC have been together since 2011.
Celebrity