Sen. Chiz Escudero on marrying Heart Evangelista: This is what I want to do before 2016

The senator admits that Heart is 'the one.' 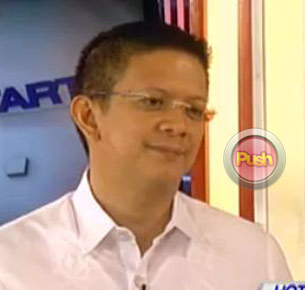 In his interview with Karen Davila on ANC’s Headstart last March 10, Senator Chiz Escudero candidly admitted that before considering running for the Vice Presidency in 2016, he would rather get married first. “Mas may pinaghahandaan ako bago mag 2016. Kesa yung 2016, yun muna.”
When Karen asked if wedding preparations are on the way for him and girlfriend Heart Evangelista, Sen. Chiz answered, “No I would want to, Karen, kung si Allan (Cayetano) may ‘I would like to become [president],’ this is what I want to do before 2016.”
The senator revealed he has yet to propose to the actress. “Not yet. But we talk about it in broad strokes. That we want to get there, be there in some point in time. But the actual process, step 1, step 2, saying yes, planning, getting a church, everything, wala pa.”
Sen. Chiz added he’s more excited thinking about marriage than politics.
“It’s not odd Karen, At the end of the day, family is important and family should be higher than any political ambition. Your stint in politics will end at sometime, point in your life. Titigil at titigil yan. Pero yung pamilya it’s a constancy that’s always going to be there,” he explained.
The senator was also not shy in telling Karen his answer to her question if he feels the actress in ‘The One.’
“You don’t enter a relationship unless you do. Yes of course,” he said.

WATCH THE VIDEO ON ABS-CBN.COM
Celebrity