Toni revealed that she has questioned her character Ginny's struggles to get Marco back several times. 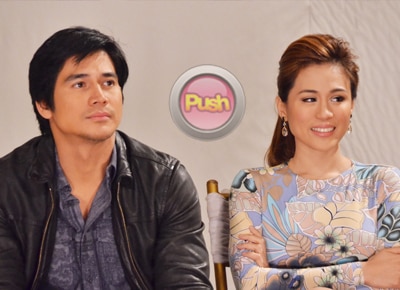 According to Toni Gonzaga, during an interview on Buzz ng Bayan on Sunday, her first big-screen team up with Piolo Pascual ranks as her "most important film" to date simply because her real personality is quite different to that of her character on the film Ginny.
"Ang hirap nung struggle ng character ni Ginny kasi hindi ako ganun. Sabi ko kay Inang (director Olivia Lamasan), Inang, hindi ko kayang gawin 'yung ibang eksenang pinapagawa mo kasi hindi naman ako ganun kadesperada sa totoong buhay," she shared her inhibition.
The host-comedienne even shared that there were several times that she had to question her Inang as to whether "May babae ba talagang ganito? May babae bang gagawa nito, maghahabol, magmamakaawa?" she said even adding that the acclaimed director often responded to her questions with a solid yes.
Apart from "de-virginizing" her onscreen, she added that Starting Over Again has also opened her eyes to the true and more extreme aspects of love.
"Kapag mahal mo pala ang isang tao, ipaglalaban mo pala talaga kasi magsisisi ka sa huli," said the Home Sweetie Home star.
In previous interviews, Toni confessed that this film made her embark on a lot of firsts as far as her being an actress is concerned. She shared that while she has made funny love scenes in the past, her intimate scenes on Starting Over Again were really delicate and that she has actually given her all for it out of trust for her director.
But she admitted, on her Sunday guesting that there were several times that she got so conscious about the said scenes that she ended up looking at the camera, which was a big no-no.
"Maraming beses. 'Yun ang sinasabi ko kay Inang. 'Inang hindi ako marunong mag-love scene. Ano ba ang gagawin sa love scene?" She shared laughingly.
She even added that she even sought her former co-stars on Four Sisters and a Wedding Bea Alonzo and Angel Locsin's advice as how to do the love scenes "correctly."
But her leading man confessed that he was especially intimidated by how Toni has evolved as an actress despite her whining about the certain scenes.
"What I noticed about Tin which scared me, intimidated me, because what she was giving, whenever Inang would give her instruction, she would say,"Paano to Inang?" Hindi niya maintindihan, hindi niya ma-comprehend because hindi nangyari sa kanya so wala siyang reference. But once nag-action niya, take one lahat" he said.
Starting Over Again is set to hit theaters on February 12.
Celebrity