Karylle admits she is a work in progress and that her Showtime family has helped to keep her grounded since she joined the show 3 years ago. 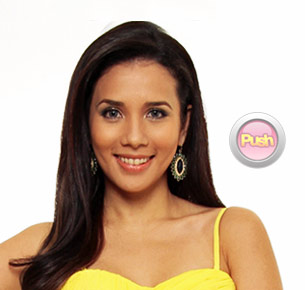 Karylle was emotional while she announced her forthcoming wedding with longtime boyfriend Sponge Cola vocalist and guitarist, Yael Yuzon today, February 8, on “It’s Showtime.”
Before Karylle gave her speech, her ‘Showtime’ co-hosts expressed their support to the singer by giving her a group hug. Then, with tears of joy in her eyes, Karylle started by recounting how she met Yael, “Not a lot of people know, some three and a half years ago, a new chapter in my life started. The happiest and most exciting one yet. I started as a hurado here in ‘Showtime’ and became part of the ‘Showtime’ family at kakambal po nito ay dumating si Yael sa buhay ko. It was a sunny afternoon. Actually, guest pa ko dati sa ‘Pilipinas Win na Win’ and kumain kami sa Mr. Kebab kasi mahilig po ako sa kanin. And, after that we had coffee and yun, sinagot ko siya. Little by little, my life started to change.”
Karylle also acknowledged how her co-hosts, DJ M.O.D and “Showtime” director, Bobet Vidanes, changed her life, “Ryan, he taught me how to be a hurado para hindi ako mavote out ng madlang people. I started to dream bigger because of Anne. I learned how to share sawsawan because of Vhong. And, I was pushed to give more and share more of myself because of direk Bobet. I learned na si Billy lang ang pinakagame sa malabo kong trip na abangan ang sunrise ‘cause he’s ready to be a friend anytime and anywhere. Teddy showed me how fun it is to have a growing family. Juggy showed me that he loves me even though he finds that I’m the weirdest in the ‘Showtime’ group. Jhong taught me to be more attentive and respectful. Colleen taught me that younger people have wisdom and Eric showed me that boys with muscles have big, big hearts. DJ M.O.D., my first ever music producer showed me that our dreams from more than ten years ago are finally coming true kahit medyo nadelay. And Vice, Vice helped me to learn how to laugh out loud, hindi yung parang dalagang Pilipina na mahinhin na tumatawa..”
Further, Karylle said that Kim Atienza’s advices helped her relationship with Yael, “Most importantly, Kuya Kim told me that I’m a good friend but a high maintenance girlfriend. So tuwing inaaway ko si Yael, parang kunsensya si Kuya Kim na naririnig ko and I just keep your words in mind and I try to be a better person.”
Karylle also said that she is a “work in progress” and that everything she had been through happened for a reason. She also expressed gratitude to the people or “angels” around her, “Thank you, Lord for all of them. You know who you are. Ang dami pong nagmamahal sa’kin and I don’t know why but I love them all too and I’m very, very grateful for each of you.”
Finally, Karylle revealed the big announcement. “Thank you all for helping me reach the next level. Next month, we wed and a new chapter begins.”
Co-host Billy Crawford expressed his excitement and support for Karylle that he even quipped, “Yael, humanda ka hah! Nandito kaming lahat.”
Then as a gift, the boys of the noontime show each performed songs for Karylle. Later, the hosts gave her gifts that included lingerie.
Watch how Karylle announced that she’s marrying Yael this March HERE
Celebrity