Piolo Pascual talks about his growing friendship with Shaina Magdayao. 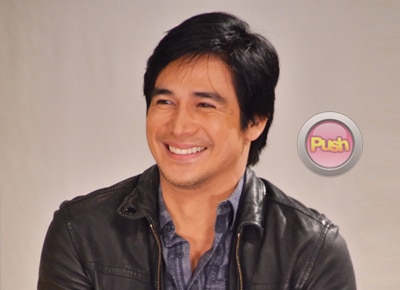 After playing husband and wife in the movie On The Job, Piolo Pascual has been increasingly vocal about his deepening friendship with fellow Star Magic artist Shaina Magdayao. Although rumors have been circulating that the two are already exclusively dating, the Starting Over Again star said that although he wishes they could spend more time together, work is currently their top priority.
“I guess bottomline is priorities and I’ve always been vocal with her naman and spend time [with her]. I want to be able to do other things but you know I’m whatever you see, these are things that are borne out of wanting to be with someone and you go from there. You don’t know where it’s going to lead, where it’s going to go. That’s one thing I want to say, sa amin na lang siguro yun,” he said.
Despite an almost 12-year age gap, Piolo said his friendship with Shaina has only grown because of their similarities and natural chemistry. The two have numerous photos online showing them in sweet poses which could also easily be assumed as public displays of affection. The 36-year-old actor admitted what part of Shaina he finds to be the most special. “Her heart. We click eh. Sobra kaming okay, yung parang ang saya lang, masaya lang. I guess that’s where we’re at right now. Sobra kaming nag-e-enjoy sa isa’t isa. We’ve been friends for so many years now and yun nga, if there’s any girl na pinaka-close sa akin, wala namang iba kung ‘di siya,” he admitted during the Starting Over Again presscon held last February 1 inside ABS-CBN.
The two have been open about going out on group dates because of their mutual friends in and outside of showbiz. “Kasi pag nagkakaroon kami ng chance to go out lately we were in Dubai sa ASAP, and I know her friends, she knows my friends so ayun,” he said.
Many are assuming that Piolo is already planning a romantic date for Valentines, but he said that will not be the case. “I’m leaving for the States on Valentines sadly. May premiere kami. Si Tin ang kasama ko because of work,” he shared, referring to his Starting Over Again co-star Toni Gonzaga (whose real name is Celestine).
Piolo also added his thoughts on what is supposedly the most romantic day of the year for couples. “Big deal lang naman sa akin ang Valentines pag may ka-relasyon ako eh. So pag wala, trabaho. Parang itong mangyayari sa amin baka umalis kami sa Valentines so I guess priority pa rin trabaho. So hindi ko naman naiisip yun. It should be a regular day but if you’re with someone, you would want to make that day special. Hindi talaga big deal sa akin yun,” he said.
Piolo also shared his thoughts on love and how much he has endured for it. “Hindi ko alam kung paano sasagutin yan eh. I guess every time na ma-i-in love tayo, iniisip natin tama. Pero there are times na parang mali so I guess there are times na gusto natin sana okay pero there are times na it doesn’t go our way. So dun mo na-ri-realize na mali, hindi tama yung outcome so dun pumapasok yung pagka-tanga ng tao kasi hindi ka naman matututo kundi ka magiging tanga,” he said.
After more than two years of being single, Piolo admitted he is ready to love again. “It will happen at the right time. I’m praying for it and I know it’s going to happen in God’s time,” he said.
Celebrity