'Rak of Aegis' highlights the triumph of the Filipino spirit in the midst of a calamity. 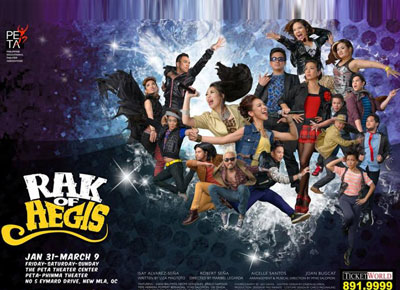 What started out as an homage to one of the most iconic Pinoy bands in the ‘90s has grown into a showcase of talent and ingenuity onstage according to Rak of Aegis director Maribel Legarda. PETA's original rock comedy musical brings to life the most popular songs of Aegis like “Ulan” and “Halik” and puts it in the context of a poor community which has been submerged in flood waters for the two months. In fact, one of the first things you notice upon entering the PETA theater in Quezon City is the specially-made stage which shows Barangay Venezia as the poor man's Macau, complete with floating garbage and resident boatmen.
Rak of Aegis revolves around the story of Aileen, a promo girl who dreams of becoming a YouTube sensation in order to become popular enough to be invited on the Ellen DeGeneres show in order to become rich. Aicelle Santos plays the lead role and shows off her vocal prowess in a two-hour performance that does not disappoint.
International theater talents and real-life couple Robert Sena and Isay Alvarez play former sweethearts (Isay as the barangay captain and Robert as Aileen's father) who have different views when it comes to supporting Aileen's dream of becoming a popular singer while comedienne Cacai Bautista proves she is good for more than just laughs with songs that showcase her vocal range as Aileen's mother.
Aileen's plan kicks off when one of her suitors (Tolits, played by PETA actor Jerald Napoles on opening night) takes a video of her singing in the rain, which immediately goes viral and is picked up by local and foreign news outlets. Aileen becomes an instant celebrity and Barangay Venezia is slowly transformed into a tourist spot.
The residents come up with a lucrative plan to sell tickets and have Aileen hold a concert in the middle of the community. What ensues next is a struggle to believe whether the event is an exploitation of a community's already dire plight or an example of believing in the power of the Pinoy ingenuity.
Rak of Aegis speaks volumes about how the Filipino spirit will not and cannot be trampled upon by any outside force, whether it be in the form of a natural calamity or unscrupulous individuals.
Catch Rak of Aegis until March 9 with 3 pm and 8 pm performances at the PETA Theater Center in New Manila, Quezon City. Tickets are available at Ticketworld.com.ph and at PETA ticket office at 725-6244.
Photo from www.ticketworld.com.ph
Celebrity