Atty. Raymond Fortun: 'I lost faith in my ability to help them'

The lawyer revealed on “Abunda and Aquino Tonight” why he resigned as spokesperson for Cedric Lee and Deniece Cornejo. 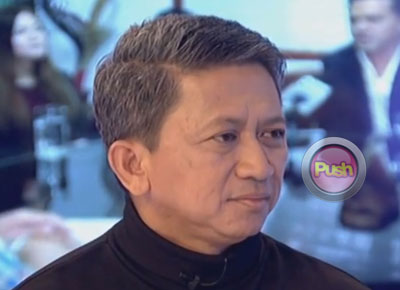 “Hindi ko na kaya gampanan ang trabaho ko.” That was Atty. Raymond Fortun’s simple answer to the question why he resigned as spokesperson for Cedric Lee and Deniece Cornejo, who are facing various charges filed by actor Vhong Navarro.
“The job that was given to me as a spokesman to educate the public to the rights of the accused, the right to counsel, the right to be confronted with the witnesses in the proper legal setting. And then yung mga nangyayari bago ang desisyon ko dito is I simply cannot do the work.  And when that time comes, just say that you can’t,” he reasoned out.
He admitted that his decision had something to do with Deniece’s interview on TV last Saturday.
“The bottomline always is, pag meron ka nang spokesman, you allow the spokesman to do all the talking for you. Why? Because as any counsel will tell you, less talk, less mistake. So you really want just one source of information na very weighted. Para hindi nagkakamali, which will conform to the evidence later on, etcetera,” he explained to hosts Boy Abunda and Kris Aquino.
Atty. Fortun clarified though that it was not the only reason why he left his job. “It was one reason, the main reason is that during the said 12 days I have been acting as their spokesman doon ko narealize na yung kontrata na binigay sa kin was just too much.”
A tipping point for Atty. Fortun to agree to become spokesperson was the “Buzz Ng Bayan’s” interview with a psychologist analyzing Cedric and Deniece’s body language in various TV interviews. “Kasi ako as a lawyer, this is something that is very rarely used, ang sa abugado, habang nagko-cross examine, tinitignan mo din yung body language ng kino-cross examine mo. Because you make now determinations when that persons has indications of untruth. And that’s when you pounce on it. Now you are only able to that when you observe that person within a length of time.”
The lawyer added he was fair and weighed everything because he wanted to educate the public.
When asked if he lost faith in his clients, Atty. Fortun was quick to reply, “Not in them. I lost faith in my ability to help them.” He also said he wants the public to be fair with the accused.
Celebrity