Kapamilya stars spent their Valentine's Day in so many different ways 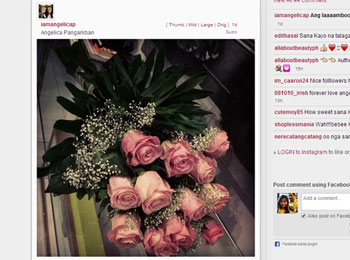 Although most stars have been mum if not uncertain as to how they would be spending their Valentine’s Day, their respective Instagram accounts are offering proof on what they ended up doing.
Tradition reigned for some male stars who sent their respective girlfriends’ flowers like John Lloyd Cruz to Angelica Panganiban, to Bea Alonzo, businessman Ryan Ordoñez to Bianca Manalo, and Luis Manzano who personally delivered red roses to his “Kulit” Angel Locsin on the set of The Legal Wife. Ikaw Lamang actress Kim Chiu received a bunch of red balloons, which fans presumed to be from her Bride for Rent co-star Xian Lim. The Queen of All Media Kris Aquino probably received the most number of flowers for February 14 despite being single because it also happens to be her birthday. It seems though that the now 43-year-old Aquino and Abunda Tonight host might be interested in someone as indicated in an earlier post. Single ladies posted a “selfie” with matching V-day greetings like Cristine Reyes, KC Concepcion, and Vina Morales. Instead of posting a “selfie” Shaina Magdayao posted inspirational quotes for women who are single and who are in a relationship.
Comedienne Eugene Domingo digressed from the usual by traveling solo to France not only to unwind but also to represent her film Ang Babae sa Septic Tank at the Vesoul International Film Festival of Asian Cinema. Comedy Concert Queen Ai-Ai de las Alas spent the day in a healthy way by having a Zumba session with no less than Star for All Seasons Vilma Santos. Most couples though spent the day in other places here and abroad like newly-married couple Iya Villania and Drew Arellano who went to Batanes while Biggest Loser Pinoy Edition Doubles host Iza Calzado and beau Ben Wintle and host Bianca Gonzalez and cager JC Intal who both went to Hong Kong.
Recently-engaged couple Aiza Seguerra and Liza Diño went to Cebu and capped off their night with in-room dining experience of Cebu lechon. Husband and wife Mariel Rodriguez and Robin Padilla meanwhile flew to Sweden for some sight-seeing.
Although it’s quite common for stars to go abroad to unwind during special occasions, there are still those that enjoyed this special day at home with their loved ones. Among them was Maricar Reyes-Poon, who had a “flaming hot” heart’s day with husband Richard Poon at home by cooking in the kitchen and single mother Sunshine Cruz, who equally enjoyed the red date with a hearty breakfast at home prepared by her three girls. Knowing that a lot of people would be celebrating Valentine’s Day on the 14th itself, Cheska Kramer and husband, cager Doug Kramer left the city for beach getaway with their family a day earlier. The same was done by Pop Rock Princess Yeng Constantino and beau Yan Asuncion.
While most celebrities are away relaxing or hanging out with their loved ones, some had to spend it working like singer Jed Madela, who serenaded his audience via a concert at The Greenery, Xian Lim, who went to Pampanga for a mall tour for his upcoming second album Xian Lim XL2 and Starting Over Again actor Piolo Pascual, who went to the US for the international screening of his new film with Iza and Toni Gonzaga. Although he was taping for his top-rating soap Annaliza, Zanjoe Marudo was able to enjoy the Caldereta made by girlfriend Bea Alonzo who had it delivered to their set.
John Prats, who’s celebrated his birthday on the 14th, had a party which was attended by his girlfriend Isabel Oli, sister Camille Prats and best friend Sam Milby. Prior to joining the party, Sam gave some of his time to his loyal fans. Others opted for a cozy home group date together their respective boyfriends this was what “It Girls” Anne Curtis, Solenn Heussaff, Georgina Wilson, Isabelle Daza, model Bea Soriano, and Liz Uy did.
Despite being in a relationship with Gerald Anderson, actress Maja Salvador steered clear from sappy posts but instead released a snippet of her first single titled “Dahan Dahan” on Instagram.
Celebrity