Julia Barretto shares how she used to be a victim of bullying in school. 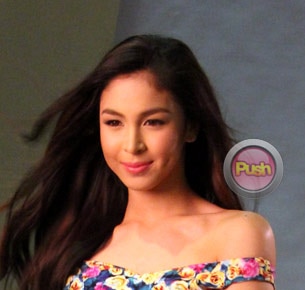 After organizing a successful garage sale which helped raise P135,000 for Typhoon Yolanda victims, Julia Barretto said she was happy to be able to do her part for a good cause. “I was always afraid to watch the news kasi I get hurt easily. So when I saw what was happening, I knew I had to do something about it. I have to help. So I told my mom I wanted to do a garage sale and then I went up to my room and looked for pieces that I can sell. I guess I wasn’t afraid to act on it or to do something that I really wanted to do. If you’re passionate about something like this, you have to do it. You can’t be afraid otherwise you wouldn’t be able to achieve it. If you’re passionate about something like clothes, fashion, food, I think you really have to push yourself to do it. Being a teenager usually they underestimate us right? But we’re actually capable of many things only if we are given the attention that others give the adults,” she shared.
After being named the new ambassador for Modess’s Make Your Move campaign last February 12, Julia said she wants to be an advocate for anti-bullying. “I’ve heard many stories of these children being bullied in school. Personally, I have been bullied in school but just being in the industry itself you experience these people trying to put you down so I guess I know how it feels to be bashed. How I do it? I just try to ignore it and as much as possible that’s what I want the other kids who are being bullied to do. I want them to just learn to fight for themselves and defend themselves and I just don’t like the thought of them going to school in fear, knowing that somebody out there is going to bring them down anytime. Si Mirabella with her appearance may mga nang-iinsulto sa kanya, may mga taong nagpapababa ng self-esteem niya. Pero it’s good that I’m experiencing this in real life because then I can put it in my character. You’ll see naman in this story how Mira faced these people,” she said.
Julia said that just like her character Mirabella, she has also been a victim of bullying. “Siguro kasi the first time I experienced that was when I was 13, dun ako masyadong tutok sa social media. I really am not affected by these things, pero pag tungkol na sa mommy ko, dun na ako sobrang nasasaktan. I remember may sinabi about my mom and as a young kid I thought, ‘You don’t know my mom. Why are you saying that about her?’ Siguro dun ako nasaktan pero ever since that day talagang I knew na I don’t want to give them the power to make me feel that way,” she admitted.
The 16-year-old actress said she wants to encourage her fellow teens to go against cyber-bullying as well. “Kasi in the business, because they have such an easy access to bash you siguro it’s already called cyber bullying kasi they’re trying to put you down through social media. Sa mga bagay kasi na ito hindi talaga ako naapektado dito kasi I think that it’s better to give your attention to those na sumusuporta sa iyo than to those put you down. This is in social media not school but I think it’s the same thing because nasasaktan ka. Pero with me kasi I want to inspire the teenagers to handle it well, to stand up for yourself,” she said.
Julia admitted she feels blessed to be in the position to be a role model to her peers. “It feels good kasi you get to inspire people, these people who are looking up to me. Pero siyempre nakaka-pressure kasi you have to do good also yourself. It’s good rin na may ganyan kasi na-mo-motivate ako to be a better person all the time. It encourages you to live your dream or whatever you stand for, fight for it and I think just being able to do what you have been wanting to do. There are so many things that teenagers are capable of only if they are willing to push themselves to do these things. I’m so, so happy and very thankful kasi they trusted me with this brand. Their campaign now, the way they encourage teenagers to push themselves to do whatever they are passionate about, parang ang gandang i-endorse yung produkto na may stand,” she said.
For Valentine’s Day, the pretty Mirabella star said she will be with family. “I’m going to be with my mom this Valentine’s day (laughs). Okay lang naman yung mga suitors, ganyan pero this Valentines I’ll be with my mom,” she added.
Celebrity