Know how some Kapamilya stars will be celebrating Valentines Day. 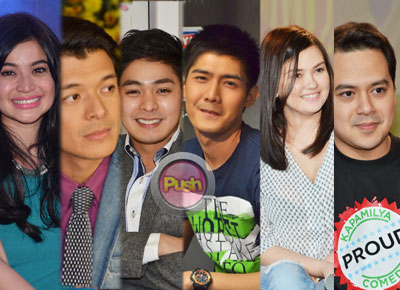 Now that Valentines Day is just around the corner, Push.com.ph asked some Kapamilya stars about their plans for February 14.
Anne Curtis, who is in a relationship with food blogger and entrepreneur Erwan Heussaff, shared that they are planning to celebrate Valentines Day with their close pals. “I think this year we’ll be doing a group Valentines date,” she said. Anne gushed how awesome it was to have a beau who knows how to cook and that February 14 would truly be a gastronomic feast. “I think I have the best boyfriend na knows how to cook," she said.
Jericho Rosales who is engaged to Kim Jones relayed that he is planning to surprise his fiancée with something that has to do with chocolates. “I'm still planning with the help of some friends na mahilig sa tsokolate. I’m still planning," he hinted.
Meanwhile, upcoming Ikaw Lamang actor Coco Martin stated that he doesn't have a date this coming Valentines Day and that he is going to be busy with work. "Wala pa eh, siyempre ngayon trabaho muna talaga. Unang-una wala akong makaka-Valentines this time, puro trabaho muna ngayon.”
Robi Domingo relayed that girlfriend Gretchen Ho's schedule is pretty hectic this week that he will just try to squeeze in a simple dinner with her on the 14th. "I've heard na ‘yung ka-Valentines Day ko would have work on Valentines Day and actually the whole week of February Valentines season, so ang gagawin ko na lang is wait for her kasi magtatrabaho siya dito sa ABS-CBN Sports and Action and I’ll cook something up sa bahay nila and that's it."
Celebrity couple John Lloyd Cruz and Angelica Panganiban want to avoid the Valentines Day rush and plan to celebrate it ahead or after the occasion. "Siguro before and after na lang at kakain sa labas. Mahirap din makipagsabayan, di ba? Madami nagce-celebrate talaga pag araw ng mga puso so baka sa 15 or 13," Angelica said. "Alam niyo sabi ko nga sa buhay naman namin araw-araw parang Valentines tsaka mahirap din sumabay," John Lloyd Cruz added.
Celebrity