Whether you're single or in a relationship, these 10 Star Cinema flicks can make you see and appreciate love from different points-of-view. Push.com.ph presents a list of heart-warming movies to fall in love with on Valentine’s Day. 1. Forevermore (2002)
The onscreen tandem of Jericho Rosales and Kristine Hermosa had their own cult following all thanks to their highly-successful soap Pangako Sa ‘Yo back in early 2000s.

Forevermore was one of the first two love team, rom-com movies of Jericho that follows the story childhood sweethearts who eventually had to part ways because one of them had to live abroad. Returning after several years, Anton (Jericho’s character) finds out that their family business—a mango orchard—is on the brink of closing down because it has failed to produce the best-selling sweet, ripe mangoes.
How was the problem solved? Simply by rekindling the romance between Jericho and Kristine’s characters.
2. Bakit Hindi Ka Crush ng Crush Mo? (2013)
Inspired by Internet star Ramon Bautista’s book of the same title, this Kim Chiu and Xian Lim-starrer made it to the list because a lot of people until this day are still baffled why their crushes don’t like them or worse, don’t even take notice of them. So with a clear-cut set of “reasons” why your crush is not into you, the film tells the evolution of Sandy (Kim’s character) from ugly duckling to a beautiful swan after she makes a deal with new company owner Alex (Xian’s character) for a makeover in exchange of helping him turn around his failing company. In a way, this film reminds us about the typical adage of how we tend to forsake common sense once we fall in love.
3. A Very Special Love (2008)
When Sarah Geronimo got John Lloyd Cruz to do the sun dance—a “traditional” dance move intended to ward off a bad weather, audiences were hooked, especially since the latter performed the dance in a adorable/dorky manner. Laida (Sarah’s character) has long been obsessed with business magnate Migui (John Lloyd’s character) that she does everything to be able to get into his publishing company. But much to her dismay, he turns out to be the exact opposite of her ideal man with his coarse attitude towards virtually everyone he comes across with at work. Perky Laida, however, doesn’t give up and eventually softens up Migui’s heart. This movie paved the way for two sequels: You Changed My Life and It Takes a Man and a Woman.
4. Labs Kita, Okey Ka lang? (1998)
“Yes kaibigan mo ko… kaibigan mo LANG ako… And that’s all I ever was to you, Ned. Your best friend. Takbuhan mo kapag may problema ka… Taga-sunod… Taga-bigay ng advice… Taga-enroll… Taga-gawa ng assignment… Taga-pagpatawa sa iyo kapag nalulungkot ka… Taga-tanggap ng kahit na ano… And I’m so stupid for making the biggest mistake of falling in love with my best friend… Dahil kahit kailan hindi mo naman ako makikita eh… Kahit kailan hindi mo ako kayang mahalin na higit pa sa isang kaibigan.” The moment when Budjoy (Jolina Magdangal’s character) confronted Ned (Marvin Agustin’s character) with these lines is what cemented this film’s place on this list. While the gut-wrenching lines might have torn your heart to pieces, it was the very reason why Ned eventually came to his senses and realized that he’s only infatuated with Budjoy’s cousin (played by Vanessa del Bianco) and was actually in love with his best friend, too.
5. One More Chance (2007)
Of the many films that starred the tandem of John Lloyd Cruz and Bea Alonzo, One More Chance ranks at the top of the list because of the original plot and the impeccable acting of both Kapamilya stars. Popoy (John Lloyd’s character) and Basha’s (Bea’s character) romance was off to a good start, but it eventually turned sour when the former’s controlling and nagging ways took a toll on the latter which eventually led to their breakup. While many stories tend to focus on the blossoming of a romance, One More Chance offered something different by showing the harrowing side of how a person copes with a tough breakup, finds new love, and learns things along the way.
And the most heartbreaking lines from the movie? “Ako, ako ‘yung problema kasi nasasaktan ako kahit hindi naman ako dapat nasasaktan. Sana kaya ko na lang tiisin yung sakit na nararamdaman ko. Kasi ako yung humiling nito ‘di ba? Ako yung may gusto. Sana kaya ko ring sabihin sa 'yo na masaya ako para sa 'yo. Para sa inyo. Sana kaya ko. Sana kaya ko. Pero hindi eh. Ang sama sama kong tao kasi umaasa pa din ako na sabihin mo sana ako pa rin. Ako na lang. Ako na lang ulit,” Basha says.
“She loved me at my worst and you had me at my best. At binaliwala mo lang lahat ng 'yon… And you choose to break my heart,” Popoy replies.
6. Kasal Kasali Kasalo (2006)
The Jose Javier Reyes-helmed film mirrors a typical Pinoy couple’s (Judy Ann Santos and Ryan Agoncillo) woes when planning their wedding as their respective families with varying characteristics, priorities, and interests end up meddling even with the littlest decisions. Complicating things is the entrance of another woman who stirs up suspicions and jealousy on the part of the bride-to-be. 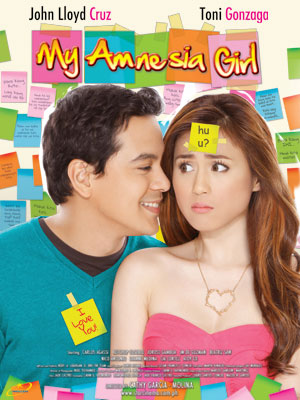 In an attempt to discourage her ex-fiance Apollo (John Lloyd Cruz) from pursuing her anew, Irene (Toni Gonzaga) pretends to suffer amnesia and forget how she was ditched at the altar by her then confused groom-to-be.
A story of second chances and forgiveness, My Amnesia Girl lets you laugh and tear up because of Apollo’s efforts to win Irene back. Loads of kilig.
8. Kailangan Kita (2002)
Kailangan Kita features Aga Muhlach and Claudine Barretto in a coming-of-age story with some cooking on the side.
Carl, a charismatic New York-schooled chef, flies to Albay to meet the family of his model-fiancee Chrissy Duran and meets her sister Lena (Claudine). While he was able to charm everyone in the family save for Papa Rogelio Duran (Johnny Delgado), Carl ends up falling for Lena, owing perhaps to her seductive outfits while cooking scrumptious dishes. Some of the highlights of this film include the reunion of the Kimerald love team and the first big screen pairing of Kathniel. Then there’s also the one-of-a-kind pairing courtesy of mentally-challenged Pipoy played by Piolo and the flirty Ayie played by Xyriel.
10. Got 2 Believe (2002)
Rico Yan passed away a month after the film was shown. Directed by highly-acclaimed director Olivia Lamasan, Got 2 Believe features the unlikely romance of Lorenz (Rico) an annoying photographer who publishes the embarrassing moments of forever-bridesmaid Toni (Claudine). Lorenz is perennially cynical about happy endings while Toni is desperate to find “the one.” In an effort to boost his career, Lorenz agrees to help Toni find someone she can spend forever with. Little do they know, fate had something else in store for them.
Celebrity