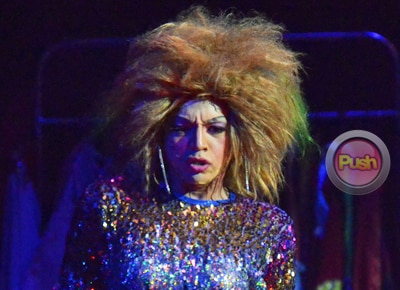 Despite having been part of at least 18 plays to date, former Star in A Million second runner up OJ Mariano still has qualms about venturing to Broadway or West End.
In an exclusive interview with Push.com.ph at the recently-concluded press conference of the rerun of Priscilla: Queen of the Desert musical, he said that he would always prefer to perform in front of his own kababayans.
“Parang I don’t know, I would rather perform for the Filipino audience. It’s a nice feeling. But I’m not saying yet na if ever something comes along I wouldn’t take it. It’s not in my mind now na venturing into an international arena. Maybe not yes,” he said.
Another reason was OJ’s obvious distrust of his own acting skills. “Kasi feeling ko I’m not there yet. Hindi pa ako international caliber,” OJ explained.
But OJ has nothing against artists like Rachelle Ann Go and Mark Bautista who are both making waves in London. “Hindi naman kasi it’s actually bringing honor rin to the Filipino talent kasi they get recognized as Filipinos for their amazing talent,” he said about the issue whether actors who decide to leave the country for an international production is considered betrayal.
He just reiterated that “It’s just that for me hindi pa eh, kailangan ko pang i-equip ang sarili ko. Hindi ko pa nafe-feel na I’m there yet to present myself to an international audience., Parang if ever I will do that, gusto ko alam ko sa sarili ko ‘Okay this is it, ito ang ma-o-offer sayo ng Filipino talent na full force.’”
OJ’s first foray into the theater happened in 2010 for his first-ever musical Rent. “‘Yun I auditioned for that kasi I was a huge fan of the show and then after that I became part of a DUP [Dulaang UP] production. Siguro I just got so fortunate na lahat ng ino-audition-an ko I get in. So kaya siya nagdere-derecho. It’s a huge, huge blessing na na-welcome ako ng theater industry,” he said.
Doesn’t he miss being part of the mainstream scene? “Not so much kasi sobrang minahal ko kung nasaan ako ngayon and I think it’s more gratifying for me. It’s a personally more gratifying experience, being part of the theater,” OJ noted.
Prior to joining the theater scene, OJ used to be a backup singer and occasional performer in a number of Kapamilya shows.
Whatever success he’s had and whatever lessons he’s learned, OJ attributed to his personal desire to learn about theater and not through a professional training.
“Parang I was shoved into this you know that feeling when you feel that you’re inadequate? So you grab every single information or whatever it is that you can use around you. Ganon ‘yung nangyayari sa akin. I’m like a sponge when I got in. Kaya ang sarap, it’s an experience that rivals nothing else for me,” he said.
Catch OJ in Priscilla: Queen of the Desert, Limited Engagement. It has shows on Friday, December 5 at 8 pm; Saturday, December 6 at 3 pm; Saturday, December 6, 8 pm; Sunday, December 7, 3 pm at the Newport Performing Arts Theater, Resorts World Manila. For tickets, RWM Box Office: Newport Mall, GF Main Entrance, (+632) 908-8000 loc. 7700. Or, call the Ticketworld hotline, (+632) 891-9999.
Celebrity