Exclusive: Daniel Padilla reacts on how it is being Angelo on Pangako Sa 'Yo

The Kapamilya teen heartthrob admits he is excited with his upcoming project with Kathryn Bernardo. 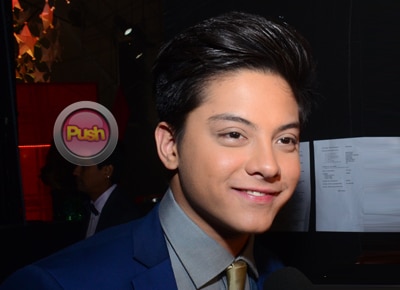 After the formal announcement that he would be headlining the Pangako Sa 'Yo remake next year, Daniel Padilla could not contain his happiness at now finally being able to share the good news with his fans and supporters of his loveteam with Kathryn Bernardo. Despite being constantly asked by the press about the project, both DJ and Kath could not yet confirm their involvement until the Pangako Sa 'Yo trailer was formally presented at the Kapamilya Thank You trade launch held last December 2 at the World Trade Center in Pasay city.

DJ, who performed during the event with Kath says he is excited to portray the role of Angelo, who was originally played by Jericho Rosales when the show first aired in 2000. “Parang kinikilabutan ako. Kasi siyempre Pangako Sa 'Yo yun mismo eh. Parang naisip ko, 'Oh my god, heto na nga yun,'” he admits. The teen heartthrob says that despite recent controversies, he and Kath are also in a good place right now professionally and personally. “Happy naman. Basta happy lang kami,” he adds.

Even when most people speculated that DJ's recent issues would cause a rift in their relationship as “mag-M.U,” Kath has always been quick to defend and show support for him. Now that they will beworking very closely again, she says she is looking forward when they finally start taping regularly after the holiday season. “Hindi ko ma-explain pero nakakatuwa. Masaya rin kami na nakita na namin yung trailer,” she admits.