Put A Ring On It: Celebrity Engagements of 2014 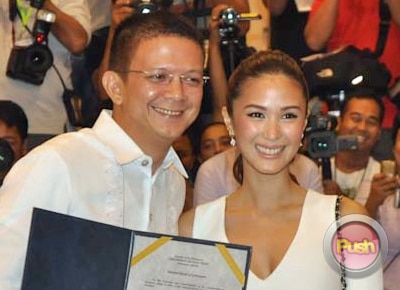 While 2014 has been riddled with controversies and other newsmakers, it was filled with show-stopping proposals by celebrity couples. From musicians to actors to hosts and politicians, everyone had their own unique way of popping the question to their respective partners.
Destination Proposals
Heart Evangelista and Senator Chiz Escudero
Sen. Chiz Escudero pops the question to Heart Evangelista
When: August 24, 2015
Where: Sorsogon
What happened: Controversial couple Heart and Sen. Chiz’s engagement happened in a Sorsogon while vacationing with a bunch of friends. News of their engagement broke out on social media in August after their friends posted photos of their gathering as well as the actress’s heart-shaped engagement ring.
Wedding date: February 15, 2015 on Balesin Island
Saab Magalona and Jim Bacarro Photo credit: Instagram @saabmagalona
When: March 29, 2014
Where: Japan
What happened: The second daughter of the late Master Rapper Francis Magalona, Saab got engaged to her boyfriend of three years, Jim, while on a family trip in Japan last March. It was Saab and her older sister Maxene who broke the news via social media as well as their mother and manager Pia Magalona.
Wedding date: First quarter of 2015
Eric “Eruption” Tai and Rona Samson Photo credit: Instagram @eruption23
When: April 21, 2014
Where: Mayon Volcano, Albay
What happened: The former It’s Showtime host picked a perfect venue to pop the question to his non-showbiz girlfriend Rona Samson after hiking and camping as he knelt before her in Albay with the picturesque Mayon Volcano as their backdrop.
Wedding date: 2015
Regine Angeles and Van Leano The newly-engaged Regine Angeles
When: November 15, 2014
Where: El Nido, Palawan
What happened: Two Wives star Regine and fiance Van barely made it to the touted “engagement year” as the latter popped the question only last month while vacationing in El Nido, Palawan. Regine broke the news of her engagement via social media with her sharing that she almost cancelled the trip to the destination due to her tight schedule for the primetime show. Thankfully though, the show’s staff and crew, she said, allowed her to go. Little did she know that the said trip would change her life.
Wedding date: 2015
Unique Proposals
Aiza Seguerra and Liza Diño Aiza Seguerra engaged to girlfriend Liza Diño
When: February 8, 2014
Where: UP Diliman
What happened: Couple Aiza and Liza’s engagement was perhaps the most talked about event this year when it happened last February during the play Kung Paano Maghihiwalay in UP Diliman. Apart from being among the few same-sex celebrity couples to get engaged, the two also made it to the short list of couples that actually got married in 2014.
Wedding date: December 8, 2014 in California
John Prats and Isabel Oli 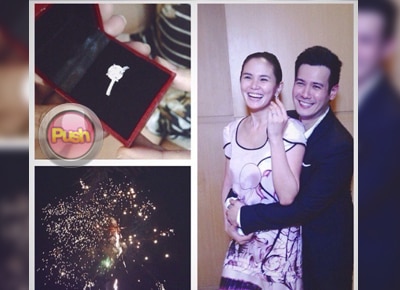 John Prats proposes to Isabel Oli in front of crowd
When: September 24, 2014
Where: Eastwood City
What happened: What Isabel thought was just a simple stroll to the mall last September turned out to be a flash mob proposal by her boyfriend John. Although they were formerly rumored to be engaged as early as January of this year, the couple vehemently denied it.
Wedding date: May 2015
Cesca Litton and Tyke Kalaw Cesca Litton is now engaged to non-showbiz boyfriend
When: April 9, 2014
Where: newsroom
What happened: The former Kapamilya host was just doing her nightly anchoring for her late-night sports show when her face suddenly popped onto the TV screens and her boyfriend Tyke appeared in the studio with flowers and then knelt before her. The happy news was actually first announced by her co-anchor Jinno Rufino on his Instagram account who posted a photo of the newly-engaged couple with a simple congratulatory caption.
Wedding date: February 14, 2015
Chito Miranda and Neri Naig 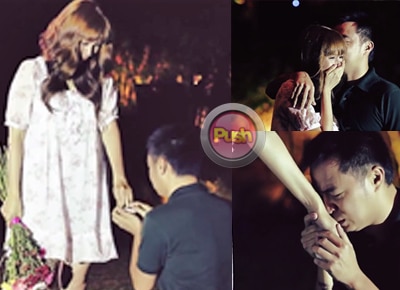 Chito Miranda proposes to Neri Naig
When: May 14, 2014
Where: Angel Fields Tagaytay
What happened: The Parokya ni Edgar frontman was creative enough to lure his girlfriend into a supposed music video shoot. In a video uploaded on YouTube, it showed a clueless Neri who acted her part perfectly for the fake music video. During the latter part of their shoot, atop a small hill an AVP of their moments together as a couple suddenly played and Chito suddenly came into the picture and asked for Neri’s hand in marriage.
Wedding date: December 13 and 14 in Quezon City and Tagaytay
Bianca Gonzalez and JC Intal Bianca Gonzalez now engaged to JC Intal
When: March 20, 2014
Where: NAIA Terminal 2
What happened: While waiting for her flight to London to spend time with her sister, the host-editor was called to the check-in counter and was handed a tarp by the ground crew as her family members and friends came one-by-one and handed her a flower. The last flower was handed by her then-boyfriend JC who knelt before her in front a huge crowd.
Wedding date: December 4, 2014 in Lagen Island, Palawan
Marian Rivera and Dingdong Dantes 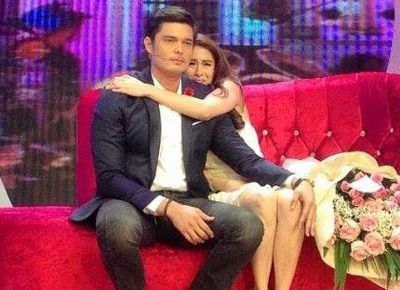 Dingong Dantes proposes to Marian Rivera on national TV
When: August 9, 2014 & August 2012
Where: GMA Studio and Macau
What happened: Much to their fans excitement, Dingdong finally popped the question to Marian during her birthday episode on her dance show last August. But after their engagement, the couple revealed that they first got engaged two years ago at the Butterfly Dome in Macau in a vacation organized by the Dantes’s for her.
Wedding date: December 30, 2014 in Cubao
Church proposals
Patrick Garcia and Nikka Martinez Patrick Garcia proposes to non-showbiz girlfriend
When: July 7, 2014
Where: Victory Church
What happened: The Two Wives star “made things right” by surprising his then-girlfriend of three years and the mother of his second child Chelsea by proposing to her before their Sunday Christian service.
Wedding date: March 21, 2015, Pasay City
JaMich Jamich are now engaged
When: May 11, 2014
Where: The Feast PICC
What happened: In what seemed to be an unconventional engagement it was Paolinne Michelle Liggayu, one-half of the YouTube sensation Jamich who proposed to her ailing boyfriend Jamvhille Sebastian. Their proposal happened during a fellowship organized by Bo Sanchez as Mich took to the stage to profess her love for Jam.
Wedding date: TBA
Get-together proposals
Gab Valenciano and Tricia Centenera Gab Valenciano proposes to model girlfriend
When: May 7, 2014
What happened: According to Gab, he planned his proposal a couple of months before which happened on the graduation party of his sister Keanna. Thinking that they were late for the party, Tricia was completely taken aback when she arrived at the venue and saw dim lights and some 50 people holding roses. She then joined the line and was confused when Gab slowly walked to her and that’s when she recognized the people to be her friends and family.
Wedding date: March 2015
Amy Perez and Carlo Castillo Ang nakakakilig na wedding proposal ni Carlo Castillo kay Amy Perez
When: October 19, 2014
What happened: The Singing Bee host didn’t think that she would even get engaged, especially after announcing that she is already set to tie the knot with her longtime partner Carlo. But Amy got the biggest surprise during her bridal shower when Carlo came in and knelt before her to ask for her hand in marriage.
Wedding date: November 12, 2014
Solenn Heussaff and Nicco Bolzicco Solenn Heussaff engaged to Nico Bolzicco
When: December 11, 2014
What happened: Solenn and her Argentine boyfriend Nicco were engaged in a private gathering attended by their closest friends. Solenn has been very open about the fact that she has been cohabitating with Nicco for a while now and that she was in no rush to tie the knot. While the French-Filipina actress had been quiet about her engagement, it was her friend Isabelle Daza and her beau Adrien Semblat who broke the good news on social media.
Wedding date: TBA
Intimate proposals
Yeng Constantino and Yan Asuncion Yeng Constantino is now engaged
When: March 8, 2014
What happened: Although they had been together at the time of their engagement for only eight months, Yan shared that he had been sure that he wanted to marry Yeng the moment that they officially became a couple. The proposal happened with Yan brought Yeng to an open field in Bonifacio Global City where they had their first date. Upon reaching the exact same spot, Yan went down on his knees and took out an heirloom engagement ring.
Wedding date: February 14, 2015 in Tagaytay
Sitti Navarro and Joey Ramirez Bossa nova singer Sitti Navarro is now engaged
Photo credit: Instagram @bossagurl
When: July 2, 2014
What happened: The Bossa Nova singer took to her Instagram account to share about how the proposal happened and that her then-boyfriend wasn’t even able to finish the line “will you marry me?” Sitti also expressed how thankful she was that Joey came into her life and that everything changed since he came.
Wedding date: TBA
Jopay Paguia and Joshua Zamora Jopay and Joshua Zamora share their journey of love and marriage
When: April 14, 2014
What happened: The dancing couple had a second shot at love this year after calling off their wedding back in January 2011. The two only got back together this year after being a couple of seven years and then parting ways which was confirmed by Jopay in January of last year.
Wedding date: June 7, 2014 in Quezon City
Jugs Jugueta and Andie Aguirre Photo credit: Instagram @jugsjugsjugs
When: 2013
What happened: According to the Itchyworms frontman their proposal had been simple which happened last year. But he first broke the news in an interview at the late night gag show Banana Nite.
Wedding date: May 2015
Celebrity