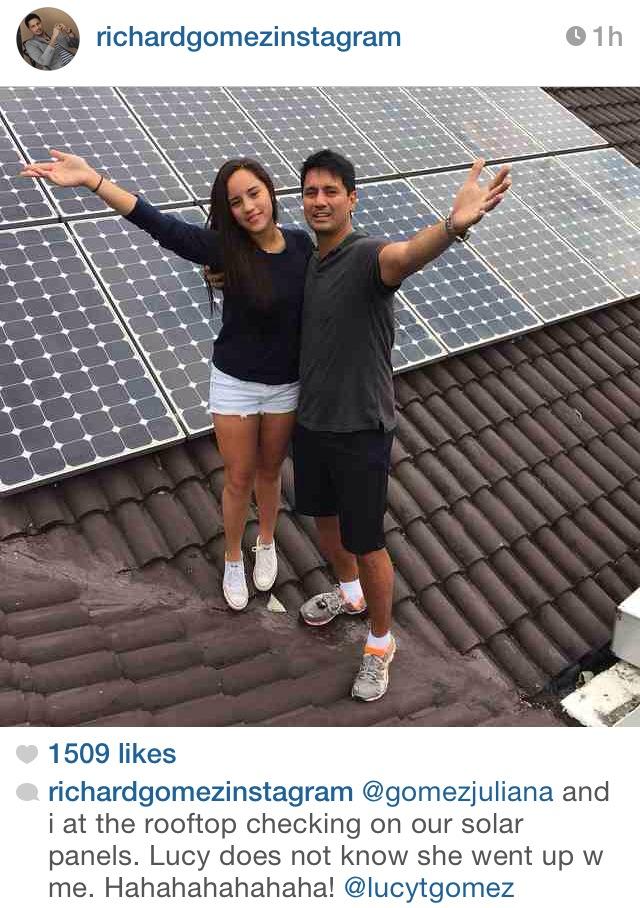 Stars are more human with the birth of Social Media. You want to know the latest on your favorite stars and they post on their Social Networking accounts their whereabouts, their favorites and special moments they share with people very dear to them. PUSH lists down some of the most-talked about celebrity posts for this year:
1.Richard Gomez and daughter Juliana share a bond envied by every Filipino family. The post on introducing to his daughter solar panels at the rooftop made the father and daughter tandem loved by many.
Richard and Juliana on the rooftop
2. FEU failed to bag the UAAP Men's Basketball Championship crown this year and for this, the Unkabogable superstar decided to fast. See what happened when Vice Ganda became cranky and reprimanded the whole household not to eat dinner.
Akala ko ba walang kakain, Vice?
3. Xian Lim demonstrated a romantic way of asking Kim Chiu out for the 8th Star Magic Ball. Happy 4th Birthday, Lucho!
6. Sarah Lahbati posts a photo of Little Charmer Zion trying to open the door of a very expensive luxury car and sees a dilemma in the future. Zion: Mommy can you buy me this?

7. Everyone is a fan of America's most bankable TV host Ellen De Generes and the Teen King and Teen Queen are two of them. KathNiel spotted at the Ellen De Generes Show
8. Coming from a controversial breakup with celebrity boyfriend Billy Crawford, news about Nikki Gil having a non-showbiz partner spread like fire. Everybody deserves to be happy. Nikki Gil's happy lunch
9.Will there be a second time around for estranged couple Aiko Melendez and Jomari Yllana? Aiko Melendez seems to be having high hopes in her recent IG post. Aiko, na-touch nang i-dedicate sa kanya ni Jomari ang race nito
10. KC was very vocal about her Mita's health condition months before her passing. Among Elaine Cuneta's grandchildren, KC was the most devastated and gave the fine lady a touching tribute in her Instagram post. KC mourns for her grandmother's passing

11. It runs in the blood. Sunshine Cruz's daughter Samantha belts out a tune in this Instagram video.
Sunshine is proud of her 10 year old princess
12. One of the hottest actresses in tinseltown is going to be a momma and she's having a girl! Cristine Reyes and her boyfriend Ali are gonna have a baby girl.
How Cristine and Ali reveal the gender of their baby
13. A mystery guy gets a power hug from the beautiful Jessy Mendiola. Now that's 'post of the day' worthy! Anne's MRT Ride
15. In this IG post by ASAP Sessionista Aiza Seguerra, she comprehensively shares her thoughts when her wife Liza Dino walked down the aisle. Aiza, teary-eyed when she saw Liza walking down the aisle

16. It's always a newsmaker everytime Richard Gomez posts a photo of him and his daughter Juliana Gomez. See how father and daughter share special moments in Richard's IG posts. Cute photo of Richard and Juliana
17. Alex Gonzaga is officially in love with a celebrity and everybody was just curious about it.
Alex is officially in love!
18. Not everyone knows that Marian Rivera and KC Concepcion are close friends. Marian posts a picture of how she appreciates KC's gift in her IG account. KC's fab gift para kay Marian
19. Rather than being stuck in traffic, Vice Ganda decided to take the MRT and have fun with the "madlang people".