Derek Ramsay denies rumors that he and Jennylyn Mercado are going out. 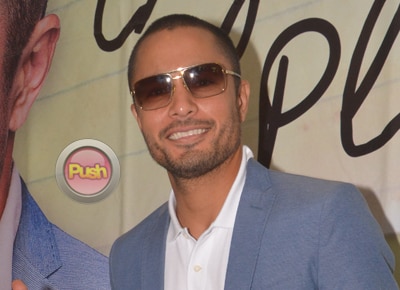 Derek Ramsay is venturing into the romance-comedy scene for the first time through his Metro Manila Film Festival entry English Only, Please together with his leading lady Jennylyn Mercado.
Since their film dwells on two individuals whose lives were ruined by love, Derek, during the press conference of their film, was asked what would his advice be for Jennylyn who herself hasn’t been that successful in her relationships.
The actress has been involved in a few failed romances with other showbiz personalities like Luis Manzano, Dennis Trillo and the father of her son Alex Jazz, Patrick Garcia.
“Don’t close your doors. Whatever [it] is you have gone through, you take the positivity of that and learn from all those things that you’ve experienced. It only makes it more exciting for the next person you’re going to be with because you are not going to make those same mistakes,” Derek said.
“’Yung pain na pinagdaanan mo you should learn to put that away because it might blind you from finding the right person,” he added.
Derek for his part hasn’t been as lucky as well since he has been involved in tumultuous controversies lately as caused by his marriage to Mary Christine Jolly.
According to Derek, Jennylyn was one of the few people who has been there for him during his recent troubles.
“She has become a friend since day one. Alam naman na may pinagdaanan ako, so tumatakbo ako sa kanya for advice and she’s really helpful, a big part of why I was able to come to the set and perform. So yeah, I was able to get a dear friend,” he said.
It was probably due to their closeness that rumors about them cozying up to each other surfaced, with some reports detailing that the two were seen strolling and holding hands in public.
This was something that Derek denied, saying that they never even had the chance to go out without their colleagues. “Holding hands? Ah walang ganon. No holding hands,” Derek clarified.\
But he did admit that they do go out for coffee and lunch. “Yeah we always go out. Sinasabi nila patago, hindi kami nagtatago. Well may lunch break kami, we go out. Kunyari minsan magkukulitan na change location ‘Oh sama sama na tayo!’ to go eat or go grab coffee before we go to the next set and everything kasi magse-set up pa. So we’ll have coffee somewhere near the location pero kasama ‘yung team niya,” he explained.
He continued, “What I like is the way I treat my team, she treats [her team] the same way. Like my PA is now my friend and mga kasambahay ko I treat them as family. Rule ko ‘yan sa bahay. Kaya ayoko ng nag-aaway away, gusto ko lagi nag-o-open up and I see that she is the same way with her team so sabi ko makakasundo ko io. So ‘yung mga kasama niya kaibigan narin ng kasama ko, so lahat lahat kami lumalabas.”
After the legal battle that he went through very publicly, Derek confessed that he is currently taking a break from love because “I’ve been traumatized by women and relationships right now.”
However, he was quick to say that he isn’t completely closing his doors on the idea of falling in love and even finding “The One.”
“I’ll never give up on love, I’m a sucker for love. But what I went through is something very hard and very traumatic but I’m sure I’m going to fall hard again. Jen has got a lot of qualities that I like. I set rules that the next is going to be ‘The One’ has to be somebody who isn’t in showbiz. It’s kind of annoying that she’s in showbiz. I don’t know, some rules can be broken,” he ended.
Celebrity