Makeover Magic: reality stars who made a major transformation

Here’s a peek at some reality stars who have made quite a change in looks and style. 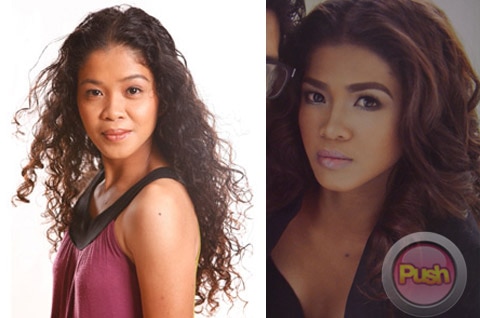 After capturing the attention of audiences as they dealt with the challenges of being in a reality show, some Kapamilya stars have undergone transformations in their lives and their looks. Here’s a peek at some stars who have made a change. Melai Cantiveros-Francisco first endeared herself to viewers as the quirky “Inday Kenkay ng Gensan” in Pinoy Big Brother Double Up 24/7 way back in 2009. With her curls were all over the place, it was her whirlwind love story with housemate-turned-hubby Jason Francisco that kept the audience glued to the screen. She didn’t plan to be in the limelight, but fate seemed to have different plans. After being the season’s Big Winner, she starred in her own movie and took part in several movies and teleseryes, including Two Wives.  Not only is Melai a mainstay in the annual Bench fashion show, she has even graced the covers of stylish glossy magazines. PBB Teen Clash 2010’s “Bubbly Promdi of Cebu”, Devon Seron, has blossomed as well. This morena beauty used to be lanky and boyish, candidly speaking her mind. Today, she proves that being “one of the boys” can be sexy, too. Her long tresses have been chopped off in favor of a shorter ‘do. It was an opportune change, perfect for her role as Riri in Moon of Desire, where she showed off her bikini-worthy body. With much energy to spare, Devon is back on TV as Jasmine in the rom-com Forevermore. Another PBB housemate has wowed the viewers with her curves. PBB Teen Edition Plus’ “Rebellious Beauty of Dumaguete” charmed viewers with her pretty face and sharp wit, earning her the 4th place of the season. Once on the chubby side, Beauty Gonzalez has now emerged as a hot goddess, named one of FHM’s sexiest and cast as Tilde in the sizzling Moon of Desire. She credits her weight loss to a healthier lifestyle, thanks to many hours spent swimming, running and crossfit training. More than anything, she improved her body for herself, and having the chance to celebrate it on the catwalk was just icing on the cake. 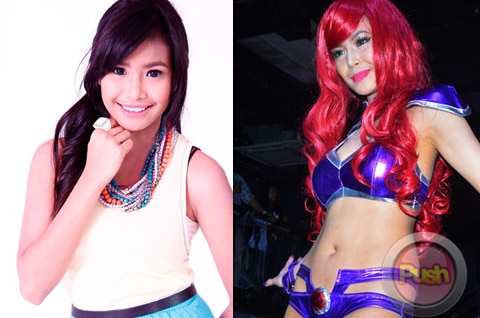 Another PBB teen housemate, Myrtle Sarrosa, has grown up. From being the “Cosplay Cutie ng Iloilo”, the season’s Big Winner was FHM’s November 2014 cover girl. Prior to joining showbiz, she was an active Sangguniang Kabataan leader and an Accounting student in UP. Since she was 14, she has been winning awards for cosplaying, making her no stranger to playing dress up. For three months before her FHM shoot, Myrtle jogged around UP to tone her body. “I want to transition into something sexier, something different, something na aabangan ng tao,” she boldly pronounced. Angeline Quinto, who rose to fame when she won Star Power back in 2011, is another celebrity who has shed the extra pounds. Like many girls, Angeline used to have issues about her body image. She revealed that there was a time that no one would take pictures with her even in mall shows, something that she attributed to her less-than-ideal appearance. Angeline is one of the few celebs who admit to having undergone cosmetic surgery. She sees it as a practical move, something that is helpful in moving forward in her career. She had her “sad eyes” changed to have a happier vibe, as well as had liposuction done on her back and arms. “Kasi sa TV parati nilang napapansin na mataba akong tignan kahit sa personal naman hindi. Siguro kapag nagpa-lipo ako, mas malaking tulong na mas maganda ang kalabasan ng itsura ko sa telebisyon,” she shared. Not everything is surgically done, though. Her sexier body is more a product of a disciplined lifestyle. She religiously sticks to her diet and does sit-ups. More than anything, Angeline has learned that she can celebrate her beauty on the outside as well as the inside. 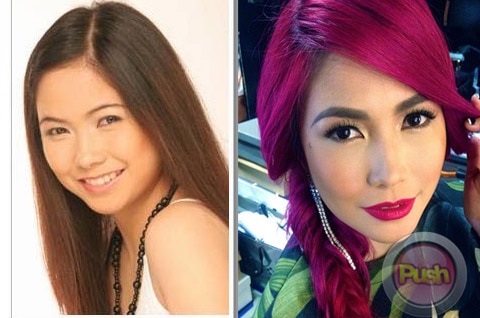 Yeng Constantino is another celeb who has gone from simple casual to rock star edgy. When she won Pinoy Dream Academy, Yeng just wanted to sing. Having people look at her and comment on her fashion choices was something that she had to slowly get used to. She has since grown comfortable in her own skin and as she discovered more of herself, so did she discover more about who she really wanted to be. Now, Yeng has developed a unique fashion sense that is both stylish and real. Her fashion changes as she reinvents herself, something that she does for herself and for her audience. “I think this is a brand new season for me, this is a season for me as an artist, iba talaga ang season,” says Yeng. “They will hear something new and see something new. Gusto ko talaga na ayaw kong ma-bore sa sarili ko.” Wearing a dress and sneakers, Davao del Sur native KZ Tandingan blew the X-Factor mentors away with her unique rendition of "Somewhere Over the Rainbow" and "Ready Or Not." After winning the reality talent search, KZ's fashion style has evolved from rugged to edgy classy. KZ often says she's not the “pa-girl’ type and continuously experiments with her looks with a team of stylists. This year, KZ took home first place interpreting the Himig Handog P-Pop Love Song entry "Mahal Ko o Mahal Ako."
Celebrity