Sam Concepcion on Anne Curtis: ‘Siyempre we all want to get along in time’

Sam Concepcion admits that he is trying his best to mend ties with his girlfriend's sister. 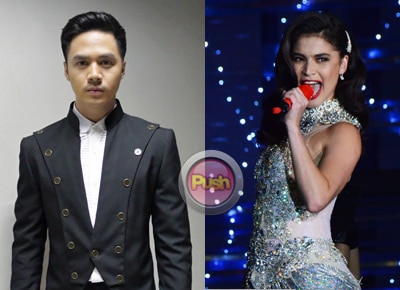 After his much-talked-about confrontation scene with Anne Curtis during Vice Ganda's birthday party earlier this year, Sam Concepcion admitted it is still not clear to him why his girlfriend's older sister does not seem to approve of him. Regardless of that fact, the 22-year-old actor said he would rather focus on the positive and has been trying his best to make the situation between them better. “Siyempre wala akong sagot for everything pero that's what I'm hoping to do in the near future. Siyempre wala namang relationship na madali. Siyempre you just have to work on some things. There's always going to be problems and challenges. This is just another one of them,” he admitted during the Jollibee #JollyJollyJoyJoy special mall event last December 14 at Trinoma mall in Quezon city.
Sam said that even after two Christmases as a couple, he is used to being apart from Jasmine during the holidays. “We won't be spending Christmas together kasi she's going home to Australia eh. I'll be spending Christmas with my family. As always naman I just stay here with the family. She's always kasi in Australia every Christmas eh. Pero siyempre Christmas is one of my favorite holidays. Maraming gatherings, maraming pagkain, maraming trabaho (laughs) so masaya,” he shared.
With their relationship being put in the spotlight by different controversies this year, Sam chooses a positive outlook on things rather than to dwell on the negative things that have transpired. “Well sa totoo lang, this year has been quite loaded. But you know God has been very faithful to me and to all of us, things like that happen every year, ups and downs in career, in life, in relationships, but God's been very good to all of us so it made us more mature people. It made us learn a lot about ourselves and how we treat other people and how we express ourselves and how we can all get along. It's all about time and I think this year has taught us a lot,” he explained.
The Jollibee Yumbassador said that he wants to be with Jasmine which is why he  wants to work hard for her family to accept him and build a better relationship with them. “Definitely. Of course my relationship with Jasmine means a whole lot to me so I don't want there to be a reason for me not to make efforts and for not making it work for everybody. Kasi a relationship means sometimes it's not just the both of us, there are people around us as well. Of course I'm mainly concerned about her and her happiness and how we are together, siyempre we all want to get along in time,” he said . Although he refused to divulge his Christmas gift for his Fil-Australian girlfriend, Sam assured us, “Basta one thing is for sure I will make it special.”
Next year looks like a promising one for the singer-actor as he is also part of the cast of the upcoming teleserye We'll Never Say Goodbye along with Richard Gomez, Dawn Zulueta, and Jessy Mendiola which is set to start on the first quarter of 2015. “Abangan niyo yun. It's a really good story. It's about family. So siyempre you'll be seeing more of me sa TV pero my music has been really good to me this year. I've been very blessed with an album na naging successful. I have a few songs na naging okay so I'll definitely make more music kasi siyempre passion ko talaga yun,” he said.
Celebrity