Beauty also refuted rumors she likes her current boyfriend because he is well-off. 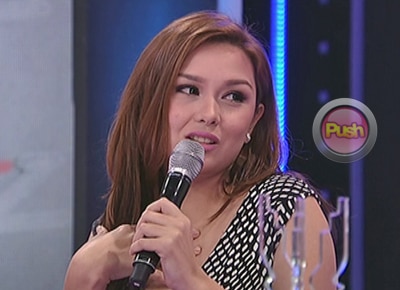 Months after she made headlines over her shocking transformation, Beauty Gonzalez is once again making headlines this time due to her much-talked about relationship with her new boyfriend, art collector Norman Crisologo.
Beauty was being questioned recently for reportedly changing boyfriends quickly and for her overlapping relationships, an issue which she addressed during her live appearance on the Sunday episode of The Buzz.
“First of all there was no overlapping in our relationship. Siyempre nung naging single ako, ayaw ko naman isigaw sa lahat ng tao na ‘Ui single na ako pwede niyo na akong ligawan!’” she said.
Beauty stressed that she has been single for some two or three months before she met Norman.
“There was no overlapping with both of us. With his side and my side,” she pointed out.
Before being in a relationship with Norman, Beauty has been very vocal about her relationship with businessman Julsar Torres De Guia, whom she met through former Pinoy Big Brother housemate Paul Jake Castillo.
The two have been in a relationship for a couple of years before parting ways a couple of months ago.
Beauty shared that their break up was mostly caused by the fact that “Well maybe he needs to fix something for himself.”
What’s more, according to the Feng Shui 2 star is that Norman had been very single for a long time before they became a couple.
With the fact that Norman is many years her senior, many presupposed that Beauty only got into a relationship with him for comfort.
To this, Beauty explained, “I don’t want to defend myself because they see me naman before PBB. Everybody knows where I came from and ano ang pinanggalingan ko. I’m working for myself. I don’t need him to take care of me because I’m earning.”
WATCH FULL VIDEO HERE
Celebrity