Derek Ramsay says he would open his doors to other networks if TV5 no longer needs his services. 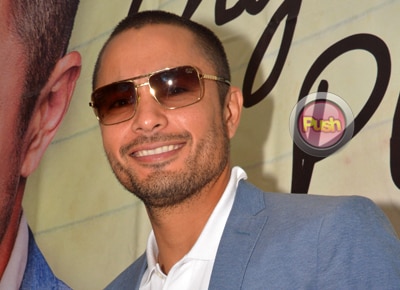 Coming right on the heels of his announcement that he will be making a movie with Skylight films, Star Cinema’s sister company, Derek Ramsay shared that his contract with his mother network is ending soon.
In an exclusive interview with Derek recently at the blogger’s conference of his upcoming Metro Manila Film Festival entry English Only, Please, he shared that his contract with TV5 will end by March.
“The truth there is the offer has been made. We’re going to sit down and meet. It’s with Skylight so natuwa ako na they called and asked if I would be interested,” he shared about his supposed impending project with Skylight.
When news of his upcoming meeting with Skylight broke out, many thought that Derek was finally patching things up with his former network. But for Derek, there really is no need for him to mend ties with ABS-CBN because, “For me it’s been behind me for the longest time.”
Derek’s controversial transfer happened in 2012 which took its toll on his relationship with ABS-CBN. This was a speculation that was further strengthened by reports that Anne Curtis wasn’t even allowed to mention his name while she was promoting her movie with him on Kapamilya shows.
“I left ABS thinking everything was okay because it was a long process. I went through the proper procedures. I got a very nice letter from the boss saying that he appreciates my honesty, saddened by the decision but you know he said that he hopes that our paths would meet again one day,” he explained. “And maybe this is it. This project with Star Cinema and it could be the start of bigger things.”
He added that, “I have nothing against ABS. I have nothing against Star Cinema. Tapos na ‘yun eh. Matagal na sakin tapos na ‘yun. So, it’s nice that they made the offer. Kung matuloy man o hindi masaya na ako na at least tumawag sila para mag-offer kung interesado akong gumawa ng pelikula.”
With his TV contract ending soon enough, does this mean that his fans could see him again as a Kapamilya? “My priority is to see what 5 wants to do with my career. If they no longer need my services then that’s when I’ll open my doors to other things,” he confessed.
According to Derek, he’s currently in negotiations with his current home network which Derek says has been good to him.
“I’m very appreciative of what they’ve done so I have to give them that respect. Just like channel 2, channel 2 did a lot for me. May mga bumps in the road but that’s why it led to certain decisions but you know that’s life, there’s always bumps in the road. I will always be grateful for what Channel 2 has done for me and they’re a big part of who I am, where I am,” he said.
Celebrity