Lani Misalucha says that her team is now in the process of coming up with a new lineup for her shows in Las Vegas. 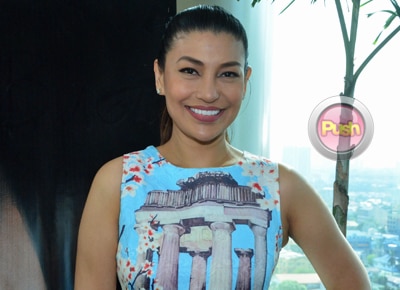 Although she is just about to stage her comeback concert next week, Asia's Nightingale Lani Misalucha said her show might be her last grand performance before she leaves the country again.
In an interview with Lani during a recent press conference for her concert, she revealed that she and her team are currently finalizing their performance line up for Las Vegas. "'Yung mga ganyang show sa Las Vegas next year ang mukhang babalik nako uli sa Las Vegas medyo binubuo na namin ulit," revealed Lani during the interview.
She added, "We'll see what's going to happen kung anong meron ang 2015 para sa akin pero as of now, 'yun ang plano namin next year dahil meron ng kumukha sa akin ulit."
Lani who just flew back into the country early this year had been performing in the US since 2004.
Her most popular comeback project was recording the theme song of the box office film Starting Over Again starring Piolo Pascual, Toni Gonzaga, and Iza Calzado on top of releasing her comeback album titled The Nightingale Returns: Lani Misalucha Sings the Greatest Filipino Songbook.
The seasoned singer shared that it was a personal decision not to do anything in Las Vegas this year since she returned to the country. "Sa ngayon talagang I chose not to do anything sa Vegas. Ang pinakahuli ko na araw araw akong nagtatrabaho was 2012, sabi ko after nito magpapahinga muna ako sa araw-araw na show na ganyan," she said.
Lani was very vocal about the fact that at her age, she's not as agile as she once was when she was still starting in the business. "So after non sabi ko teka muna parang gusto ko munang gumawa ng iba kasi biro mo sunod sunod 'yun. Show everyday. Sabi ko pahinga muna ako sa ganitong klase sabi ko gawa muna ng iba so nag-show muna ako sa iba't-ibang states sa US, ganon rin pero at least hindi everyday," Lani revealed.
Lani's career abroad mainly focused on performing as a lounge singer in various hotels in the US, among them The Hilton Hotel, The Flamingo Hotel and Casino, and Bally's.
Her return to the Philippines was something that she also didn't expect herself because it just happened in the middle of her career there when "Hanggang sa marami akong nakukuhang calls from here sa Pilipinas."
"Ganyan mga show sa Resorts [World] hanggang sa each time na nandirito ako lagi kaming nakakatanggap ng calls to do this and that. So sabi namin sige, since marami namang tumatawag samin sige gawin na muna natin itong sa Pilipinas," Lani narrated the decision she made with her husband.
It wasn't that much of tough decision for her since "Anyway sabi ko malalaki naman 'yung mga bata I guess this is the best time for us to leave US every now and then. And it's a good thing, siyempre Pilipinas ito eh, bakit naman hindi? Makakauwi kaming mag-asawa madalas."
Since her return, Lani has been nothing but grateful to her ardent fans for the support that they have been continuously giving her.
Lani will be joined by Arnel Pineda, Jed Madela, and G-Force at her La Nightingale concert on December 6 at the Big Dome. The concert will feature the music of the ABS-CBN Philharmonic Orchestra under the baton of Maestro Gerard Salonga.
Celebrity