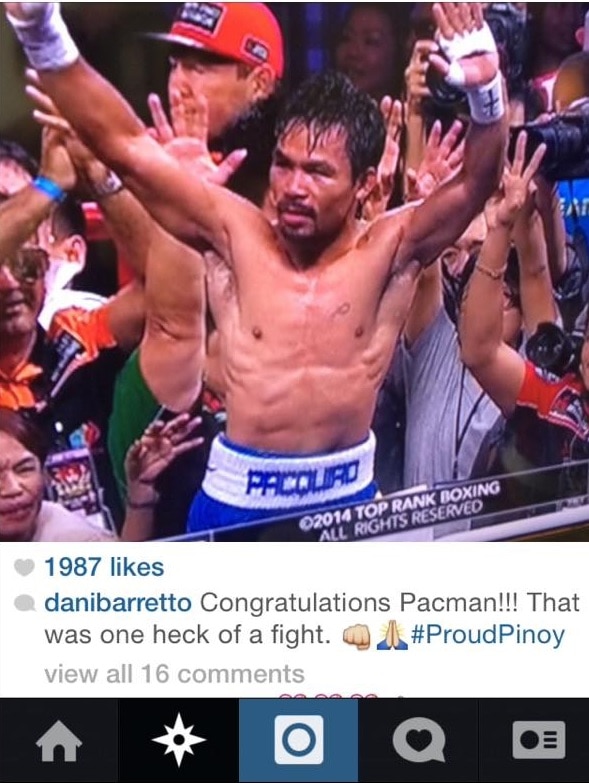 Pound-for-pound boxing champ Manny Pacquiao has once again brought the nation into the spotlight on When he defeated American boxer Chris Algieri via unanimous decision on November 23.
Pacquiao fought Algieri at the Cotai Arena in Macau and defend his WBO welterweight championship.
The action-packed fight which led to Algieri being floored six times was seen by many as the return of the Sarangani congressman's killer boxing prowess.
Although he failed to knockout Algieri, Pacquiao nevertheless won against him via a unanimous decision with the scores 119-103, 119-103, and 120-102.
Present on his fight were Pacquiao's family composed of his wife, Saranggani Vice Governor Jinkee Pacquiao with their kids and his mother, Mommy Dionisia Pacquiao.

Also spotted along the ringside in Macau were Hollywood action stars Sylvester Stallone and Arnold Schwarzenneger while Victoria's Secret supermodel Adriana Lima and NBA basketball superstar Jeremy Lin took to their social media accounts to show support for Pacquiao.
Meanwhile, as expected the Filipino public celebrated the boxing champ's win along with the local stars who took to their respective social media accounts to praise and congratulate the Pambansang Kamao.