Valerie Weigmann on following in Megan Young’s footsteps: ‘It's a great challenge’ 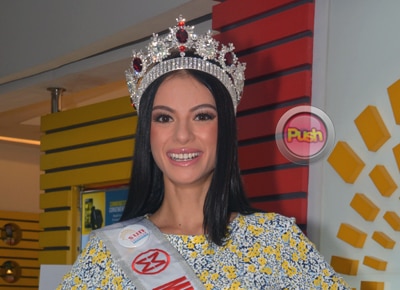 As the Philippine representative to the Miss World pageant in London, Valerie Weigmann said her schedule was already packed with preparations right after she won the crown last October 12. “The training is already happening actually. Even before joining the pageant, we started training months before the screening. Good thing because it really helped me because now I got more confident and at least I know already what to do because I'm a first timer in pageants so I really needed the three months training before,” she shared.
As part of her duties as the reigning Miss World Philippines, Valerie said she is also happy to be able to attend her personal advocacies. “It's so exciting. Right now I'm supporting the indigenous brothers and sisters in Tarlac, the Aeta community. It's my personal advocacy even before I decided to join Miss World. Because I met a lot of indigenous communities in Zambales and Subic and I got very curious about them. Because they were selling their local products in those areas, the tourist spots. We would talk about where they come from and that's how I got really interested in supporting them,” she said.
With the Philippines having won last year’s Miss World, Valerie admitted she knows the pressure to produce a back-to-back win for the country. “There is always pressure in everything you do, especially if it comes to a contest but without pressure there wouldn't be any excitement right? So that's how I see it. And at the same time the challenge that I have to face during the situation that I am in now, it's a great challenge. It's a challenge that I want to take and that I want to pursue so I will give my best and be the best that I can be. And I also want to tell everyone to also join me in this journey and see how everything goes and to also support me,” she admitted.
Valerie said she has taken to heart the advice Megan Young gave her after winning the crown. “Megan Young is one of my idols. To make it possible for us to be the winner, to represent the Philippines and to get the crown after so many years, that's already such a big achievement and kudos to her. I know that she did a lot. She put so much effort into it. Her dedication was there for her country. After the pageant she congratulated me and told me, 'Val, huwag ka ma-pressure. Alam mo naman a lot of people are wanting you to have a back-to-back win. Just be yourself. Never forget to be yourself and enjoy the whole experience.' Just like she did. So I'm happy that she told me that because it's always good to be reminded to stay grounded, to never forget where you came from. Because it's very important especially during a contest, you feel the pressure and you feel the competition between the other girls. So you can lose yourself. But if you know who you are and if you stay true to yourself, you wouldn't change during that time. It's the most important thing. Even the way I see things when it comes to showbiz and anything. In everything you do in life, never forget where you came from. Be yourself and don't compare yourself to others. Because it's impossible to please everyone,” she explained.
After her homecoming in the province of Albay, Valerie said it was an unforgettably warm welcome from her mom’s hometown. “My mom is in Germany right now so she couldn't be there during coronation night. She's just so happy to see that all her kababayans are happy also about me winning and me coming home really, it's an amazing feeling. I didn't expect that even though it was raining in Albay, everyone came out of their houses and they would stop working just to see me, just to say thank you and ako naman I'm just happy to see everyone and to feel that they really appreciate that I won the crown and it's amazing to see on how much hospitality there is in Albay especially,” she admitted.
Even from her father’s country, Valerie said she is also happy for the support, with some German websites reporting the news of her win. “I'm happy about it. I'm really flattered and happy about all the comments that I'm getting form my German side. Of course, since half-Filipino naman ako and half-German, I'm really happy about it because I had the chance also to grow up in Frankfurt, Germany. To get two countries at the same time, the east and the west,” she said.
Even now that she is a full-fledged beauty queen, Valerie said she will still be a simple girl at heart and that includes indulging in the food she loves every once in a while. The 24-year-old host-actress revealed that her favorite comfort food is pizza. “I love pizza (laughs). I even tried the laing pizza in Albay, I'm telling you it's so good!” she shared.
Celebrity