Kim Atienza says no to politics 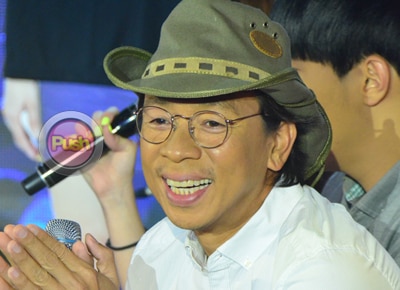 Despite being the eldest son of former Manila Mayor Lito Atienza, Kapamilya host Kim Atienza was adamant in saying that he has no interest in joining politics. Kim, more popularly known as Kuya Kim, during the recently-concluded launch of the first-ever Garmin concept store in the Philippines at Glorietta 5 claimed that he simply doesn’t have the passion for politics.
“May mga politicians na sobrang galing, ‘pag magaling sila dahil passionate sila doon. I don’t have the passion for it. But if you ask me why? I don’t know. But I think that there are things that you’re passionate and not passionate about,” he reasoned.
“I’m passionate about triathlon, I’m passionate about my family, I’m passionate about TV, I am not passionate about politics. ‘Pag walang passion bakit mo gagawin?” he asked.
According to Kuya Kim, he could enter politics if he wants to “I can exist, I can survive, I can probably be good but will I be happy. I will not be happy. So bakit ko papasukin? Tutulong nalang ako dito sa likod.”
Kuya Kim is no stranger to questions about him running for office but it’s an issue that he has long resolved with his family. “People have asked me to run, not my family ha. My family has already accepted the fact that I’m not going to run, they respect my decision already but ayoko na ‘yun. Galing na ako diyan and I know that I’m of more use and of more help doing the thing that I do,” the It’s Showtime host claimed.
Kuya Kim is well aware that a lot of people are favoring him these days but he stressed that this kind of admiration might not last long should he decide to run. He said, “People like me because I’m Kuya Kim not interested in politics. If they see the Kuya Kim interested in politics then they will not like me anymore.”
The one thing that he’s very much passionate about is triathlon wherein he’s part of a group called Team Gotta together with actress-model Isabelle Daza, Anne Curtis’s boyfriend Erwan Heussaff and former politician and ABS-CBN reporter Gilbert Remulla.
Despite his active lifestyle, Kuya Kim suffered from a mild stroke in 2010 and from a rare Guillain-Barre syndrome last year. Guillain-Barre syndrome is a rare autoimmune disorder that attacks the person’s nervous system causing weakness and tingling in one’s extremities as the first symptoms.
It is said to be caused by a bacterial infection which leads to “muscle weakness, loss of reflexes, and numbness or tingling in your arms, legs, face, and other parts of your body.”
Asked how his health was, Kuya Kim replied, ”It’s never been better. I’m so blessed because I’ve had two health crisis in my life, I had stroke and Guillain-Barre syndrome and the Kuya Kim now is much better than the Kuya Kim ever was and that is all not because of me. I’m totally powerless. It’s all because of the Lord. I found the Lord and the Lord has blessed me. And that’s reason why I’m alive and healthy.”
According to him, the two health crises he went through hadn’t in anyway made him feel like he had to be more careful in his activities because “I always was careful. But you know these things come and I know why because the Lord wanted me to be closer to him. That’s all it is and I get the point.”
Celebrity