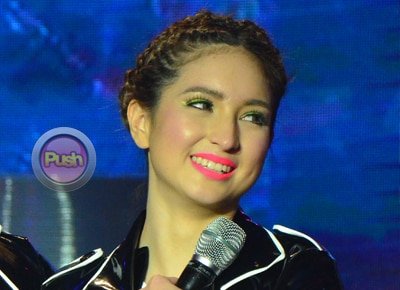 After being welcomed into Star Cinema via her recent contract-signing last November 12, Coleen Garcia will be working on her first major movie project with Sam Milby and Meg Imperial. “I’m really, really excited. Maybe more than anything, yung emotion na nag-sa-standout talaga is really excitement. I’m really looking forward to this and I’m looking forward to making the most out of things. The movie is called Ex With Benefits and it’s a Wattpad story. I find it cool how a lot of movies nowadays are based on Wattpad stories because in a way you kind of see which stories work with the readers and it gives them something to look forward to as well. The title is Ex With Benefits so it kind of speaks for itself (laughs) and it’s something different for me,” she shared.
After doing a look test for the movie, Coleen said she already knows working on the film will be fun. “It was good naman. It was fun. I guess one thing that really excites me also is that I’m working with the same director I worked with in #Y and the same writer, too, so I am really comfortable already with them and I know for a fact that it’s going to be a fun and happy set. I’ve never worked with Sam and Meg before this so this will be my first time. I know both of them already very well. Meg is a hurado now on Showtime and I like them. They’re really nice and they seem easy to work with so I think we’re all just going to be having fun while doing this project,” she said.
After getting positive reviews for her indie film #Y, Coleen said she will strive to become an even better actress. “It feels really, really good. Because that was for Cinemalaya and I was around really talented actors. I always thought before becoming a host that I would take this path to acting but I ended up becoming a host and now I guess I’m back to acting and it’s something I didn’t really plan. I just really go where I’m taken so that’s also what happened when I started joining Showtime, I just went with it. So now I’m having fun and I’m learning a lot from it so I’m just going with the flow right now,” she said.
The indie film #Y is set to be re-released under Star Cinema in December. “I’m happy because a lot of people weren’t able to see it and people would tell me, my friends, distant relatives, people also in showbiz, they tell me that they wish they could’ve seen it but they weren’t able to because it only came out in selected theaters in Metro Manila. So I’m excited because now people who want to watch it can watch it,” she added.
Celebrity