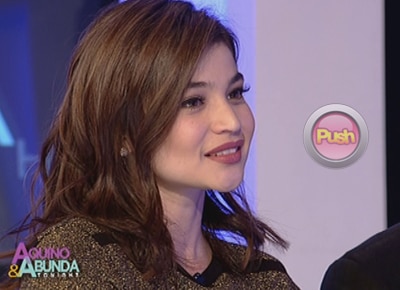 On Aquino and Abunda Tonight, Anne Curtis and her European leading man Alexander Dreymon talked about Blood Ransom, a Hollywood-produced independent movie about vampires.
Anne admitted being nervous when she auditioned because she was only 15 years old the last time she did one. Alexander also auditioned for his part.
Anne confessed that she had a hard time doing the kissing scene with Alexander. “It was one of the most embarrassing moments of my life.” The actress explained that it took her a while to get the scene right because unlike here in the Philippines, she had to really kiss the guy she’s doing the scene with. She was also advised by the director to practice the kiss longer so she would get it right. Anne followed the director’s advice and after that, Anne proudly shared they were able pull off the scene in one take.
Aside from doing kissing scenes differently, Anne said the hours were very strict on a Hollywood set and the crew has a say on important matters such as time. Anne also revealed that night effects were really shot during nighttime and there was always food on the set.
Alexander shared that he was born in Germany and he grew up in many other places because he and his mom were adventurous and they loved moving to new places. Alexander’s next project, entitled The Last Kingdom, will be with BBC.
Blood Ransom will premier in the Philippines on October 29.
Celebrity