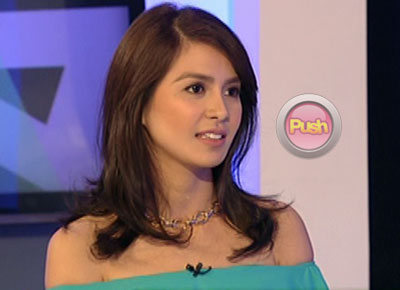 Two Wives star Kaye Abad said that she is happy with the projects that she has been given no matter what her roles have been. “Actually I thought na parang hanggang doon na lang talaga na…though I was happy na support tapos maganda naman yung mga roles and napapansin din naman,” she said.
To answer rumors comparing Two Wives to the former primetime teleserye The Legal Wife, Kaye said that the two shows have different storylines. Giving away a brief story plot, she narrated, “Yung mistress magiging wife and then yung wife magiging mistress because… Nung time na papakasalan na niya (the leading man) yung second wife, maaaksidente siya. Magkaka-amnesia,” adding that the leading man will only remember his first wife.
Talking about her current boyfriend Paul Jake Castillo, Kaye said that they have been close friends since 2011 before they got into a romantic relationship.
Two Wives starts on October 13 on ABS-CBN Primetime.
Keep on watching, Aquino and Abunda Tonight, weeknights after Sana Bukas Pa ang Kahapon on ABS-CBN.
If you are in the Philippines, watch the FULL episode on www.iwantv.com.ph
If you are outside the Philippines, watch the FULL episode on www.tfc.tv