Actresses who became recording artists once upon a time 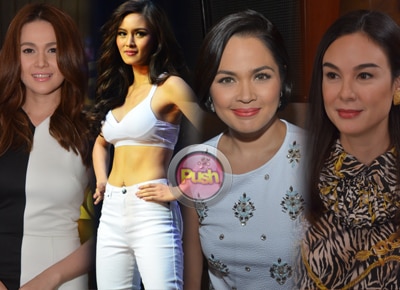 In the olden days, practically all actors and actresses had to be singers too. Today, only a handful of them can actually carry a tune. If you weren’t already aware of it, here’s a handful of teleserye royalties who have sneaked in the title of “singer” in their credentials.

Judy Ann Santos has gathered many titles in her acting career, including Box Office Queen. The charming host of Bet on Your Baby and I Do is gearing up to star in the remake of Tiyanak. No matter how successful her acting career is, though, Judy Ann did not let an early showbiz career box her in. Instead, she allowed herself to discover that she can be a fantastic wife, mom, chef, entrepreneur, and singer. She actually has 3 albums under her belt: Judy Ann Santos in 1999, Bida ng Buhay Ko in 2001, and Musika ng Buhay Ko in 2007. She sang “Both Sides Now” with Megastar Sharon Cuneta and went solo on “My Pledge of Love,” “I Won’t Last a Day without You,” and “I’m Sorry My Love,” among others.

From being the young Katrina Argos in 2002’s Kay Tagal Kitang Hinintay to playing the feisty Atty. Emmanuelle Gaspar-Romero in Sana Bukas Pa Ang Kahapon, Bea Alonzo has wowed her audience with her dramatic prowess. But Bea is not just “This Generation’s Movie Queen”. In 2008, she released “The Real Me” under Star Records which bagged the gold record twice and the platinum record, thrice. In this album, Bea deliberately chose to step out of her comfort zone and jammed to songs such as Betty La Fea’s theme song, “Kagandahan.” Her other song, “I’m Missing You,” had her acknowledged as the Breakout Star in the 2008 Waki OPM Music Awards. Since winning the title of Teen Big Winner in Pinoy Big Brother, Kim Chiu decided to put her best in her chosen career. Busy with shooting Ikaw Lamang and about to film Past Tense, this chinita princess has not only achieved many awards as an actress, but was able to cut two albums under Star Records. She released the single “Crazy Love, which was featured in her album “Gwa Ai Di” in 2007. This album was followed by “Meteor Garden” in 2011, with both albums reaching gold record status. Image source: https://www.opm2go.com/albums/kim-chiu-kim-chiu---gwa-ai-di
Gretchen Barretto, who will soon star in “The Trial”, dabbled in singing herself. La Greta released two albums, Unexpected in 2008 and Complicated in 2009. The actress said in previous interviews that the songs in her albums are related to what is happening to her life, with Complicated referring to her peaceful, happy and yet complicated love life Image source: https://www.mymusicstore.com.ph/
Her estranged sister Claudine Barretto, dubbed the “Optimum Star”, also has a couple of songs to speak of. She sang “The Gift” with actor-singer Piolo Pascual, her co-star in the top grossing movie Milan. The most memorable for her fans, however, would probably be her duet with Rico Yan for “Got to Believe in Magic,” which also happens to be the title of their last movie together. Claudine also recorded “Til My Heartaches End