Myrtle Sarrosa says that she has so much in common with Brian Poe. 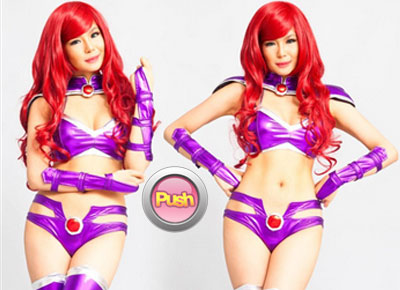 Senator Grace Poe’s son and aspiring actor Brian Poe is courting Pinoy Big Brother alumna Myrtle Sarrosa. In an exclusive interview with Push.com.ph, both confirmed that they are seeing each other.

Myrtle relayed that they also have so much things in common. “Like he’s also into anime and I’m into anime and you can never run out of topics to talk with him parang kasi sometimes when you’re on a date with someone and you're talking parang bigla na lang nagkaka-silent mode pero with him parang dere-derecho kami and there's a no dull moment with him and lagi kaming masaya. We always do crazy, fun stuff.”

When asked if Brian has a good chance to become her boyfriend, Myrtle answered, “Yes! Kasi he's like parang nasa kanya na lahat.”

Brian was in full support of Myrtle posing for the cover of the November issue of FHM magazine. He said that he is proud of the PBB alumna. “I’m very proud of her because when she told me I thought that she was joking na she’s going to be with FHM but I've told her na if you're gonna do the FHM cover you we really have to work out to get there so talagang she worked out, she runs almost every day, she goes to the gym and then now I’m proud of her.”

Brian hopes to work with Myrtle in the future in a show as he is currently undergoing workshops with Star Magic to be an actor. “I chose to be in show business kasi sana to continue the legacy ng grandparents ko, sina Fernando Poe Jr. and Susan Roces so we’ll see where it goes so right now, acting, hosting lahat ng ‘yun,” he shared.

Myrtle hopes to work with Brian in a romantic-comedy project. “Ako kasi I’m a huge fun of rom-coms and it's really funny so I guess sana rom-com drama [gawin namin] and hosting because also were doing hosting class together.”