Laughter and Tears: In memory of Tia Pusit

A tribute to the simple and low-key comedienne. 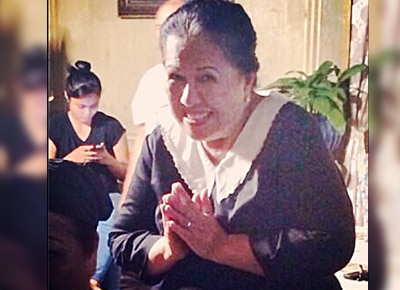 Veteran comedienne Tia Pusit passed away yesterday evening after a long fight with a kidney condition and aortic aneurysm. Myrna Villanueva in real life, she was a staple of comedy movies and shows in the 80s and 90s. Her sister, Nova Villa, may be the more popular actress, but Tia Pusit also made her mark in showbiz, with PUSH listing down her most memorable projects.

Eh Kasi Babae – One of the most memorable sitcoms of the 80s, Tia Pusit’s name stuck to the public’s consciousness as to what Matutina was to John N Marsha. The character Tia Pusit, the aunt of Gloria Diaz’s character was such a hit, that Myrna took it as her screen name.

Bahay Mo Ba ‘To – From 2005 -2006, Tia Pusit was part of the cast of the GMA sitcom. In fact she won her first acting award through the show, Best Comedy Actress in the 2007 Star Awards for TV. It was a tie with ABS-CBN comedienne Pokwang but nonetheless Tia Pusit was very happy to have received an award after all the years she has worked in showbiz.

Mara Clara – Once in awhile, Tia Pusit ventured into the drama genre. In 2010, she played Yaya Vonel, nanny to main antagonist Clara Del Valle. She was the kind-hearted confidant to Clara, who tried to sway the young girl from doing evil things.

One True Love – In 2012, Tia Pusit became a nanny on TV once again, appearing as Yaya Brittany on GMA’s drama series. She played a mother-figure to lead character Leila (played by Agot Isidro). The series ran for 5 months.

Ikaw Lamang – This was Tia Pusit’s last project on TV before she succumbed to her illnesses. She again played a nanny, Nana Soledad, this time to Kim Chiu’s character Isabelle. Isabelle, who treated the househelp as a very close friend, confided to Soledad her feelings for Samuel. Tia Pusit played the bridge between the star-crossed lovers.