KZ Tandingan denies suitor is riding on her coattails

KZ Tandingan on current suitor: ‘He doesn’t need to use me because he has the talent to make it’ 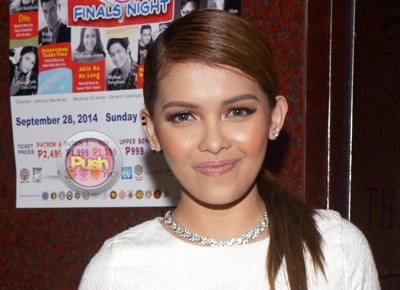 Himig Handog P-Pop Love Songs 2014 Best Interpreter KZ Tandingan is currently exclusively dating a singer-songwriter. While she refused to name him in a recent interview, KZ said they have known each other for a while now. “Okay masaya naman po ako. I’m dating someone na friend ko na din siya dati pa,” KZ shared.
But even if they are already exclusively dating, the X Factor Philippines winner claimed that they are in no rush to make things official. “Di ba sabi ko nga kaming dalawa nasa industry ng music so ‘yung priority namin now ‘yung careers namin,” she said of her special friend of over seven months now.
KZ’s blossoming love life was first revealed during her recent guest appearance on Kris TV wherein she related that he is also into music like her. “Kaka-start niya pa lang pero he’s under a label already and he has an album na rin... pero mas more on the composer siya aside from the singer,” she said.
The 22-year-old singer, who used to be reluctant in finding love, said she appreciates the feeling adored not only by her friends and family.
“Yes of course. Inspiration ko naman ang pamilya ko and friends ko. Aside from that, iba rin ‘yung feeling na there is this one person who makes you feel special other than just a friend but someone na significant sa kanya,” she said.
However, even if a lot were happy for the “Mahal Ko o Mahal Ako” singer, many are seemingly unconvinced by her special someone’s intentions. But KZ was quick to defend that he’s not the type to ride on her coattails.
“Kasi even before pa we wanted to keep it just low-key kasi di ba gusto namin magkaroon ng life behind the camera. Hindi ‘yung nakikita na lang ng lahat ng tao ‘yung mga gusto namin i-keep private pero nung time na ‘yun nung tinanong ako ni Ms. Kris [Aquino] I won’t deny him kasi alam kong masakit ‘yun,” she recalled.
What happened after she revealed about him on air? “Nag-sorry ako sa kanya kasi ayoko namang i-deny. Tapos sinasabi niya nga sa akin eh na ayaw niya nga eh nung sinabi ni Ms. Kris (Aquino) na, ‘Why don’t we invite him to sing here…’” KZ said.
KZ even underscored that her special someone initially didn’t want to be part of the morning talk show “kasi ayaw niya ‘yung mga ganong issue na gamit or ganyan. But he doesn’t need to use me because he has the talent to make it.”
Celebrity