James Reid and Nadine Lustre said they ‘complement each other.’ 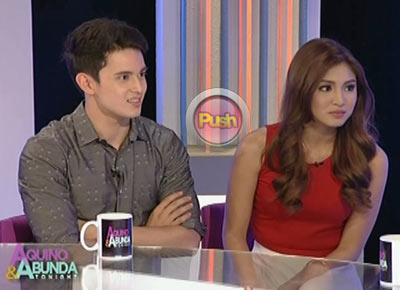 On Aquino and Abunda Tonight, the JaDine love team celebrated another career high as their Wansapanataym episode got very high ratings.
James Reid and Nadine Lustre said they consider themselves lucky to being constantly compared to the Teen King and Teen Queen Daniel Padilla and Kathryn Bernardo after being in the limelight for only eight months.
James and Nadine also confessed that they weren’t always appreciative of their being in showbiz. Nadine said she let go of big projects from other networks when she was just starting out. It was, according to her, a decision she regretted. James, for his part, also didn’t take his showbiz career seriously after he became Pinoy Big Brother Teen Clash 2010 Big Winner. Now, both of them feel lucky that they were given second chances and both are now “passionate” with their showbiz career.
James also shared that he wasn’t always talented and his talent for singing and dancing came only after PBB.
Asked if James is a hard-core partier, James said he wouldn’t call himself hard-core but he admits loving partying. He said his love of parties has something to do with growing up in Australia. Aside from that, James said he likes electronic music.
Would James and Nadine agree that they are a “perfect match yet a mismatch?” James answered for them and said, “I think we complement each other.”
Celebrity