Christina Grimmie on her first show abroad: ‘Filipino fans are the real deal’

The Voice US Season 6 finalist Christina Grimmie is excited to perform outside of the US for the first time. 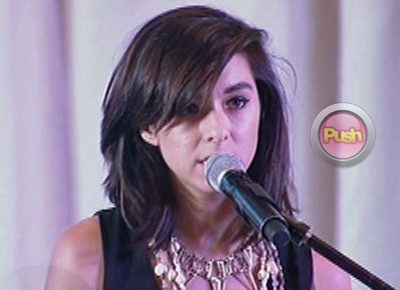 After starting out as a YouTube sensation five years ago, The Voice US finalist Christina Grimmie admitted she never imagined her career would take off after doing covers of hit songs on the popular video sharing site. “I’ve been doing that for a while and things kind of elevated and I went on tour with Selena Gomez and that was a pleasure. It was amazing. And then after that I went on and I my own music and came out with two albums which was awesome. Then I went on The Voice,” she shared during her Ayala Malls presscon held last October 3 at the Hotel Intercontinental in Makati City.
The 20-year-old singer admitted she had always been curious about the Philippines because of her online fans and felt it was only proper that this would be where she will perform overseas for the very first time. “It’s cool to say the Philippines is the first place I got to go to outside of America and Canada. I always wanted to come here since years ago. I had a lot of Filipino fans and it was awesome because they have such a big online presence. Filipino fans are the real deal. They hit me up all the time to ask, ‘Why aren’t you here yet?’ I get a lot of retweets and a lot of favorites but the first time I posted that I was coming to the Philippines, I really don’t even know what happened to my social media, it was up like thousands and thousands and thousands of people liking it, favoriting and retweeting. It was overwhelming and I’m not used to that. It’s crazy so that was one of the reasons I was so excited to come here. It just confirmed how many fans, or as I would call them ‘friends’ are here and it’s just amazing to actually finally be here and experience that,” she said.
Christina, who candidly admitted that she was happy to get 13 hours of sleep upon arriving in Manila, shared why she has a lot of fans. “One thing that I noticed that a lot of people were telling me as well is I’m relatable to people and I look up to people that are relatable. I was a little quirky, a little awkward, slightly comedic and I sang and I think people just saw and liked that. There were a lot of things about me that maybe people saw in them. For me it’s just truly a blessing to be able to say that I have inspired people. I want to continue to do that,” she explained.
After joining the sixth season of The Voice US, Christina said she was never the same as a performer, especially after being mentored by her coach Adam Levine. “The Voice was honestly the best thing I’ve ever been through in general, ever. These people, they look after you, they’re genuinely excited for you and going through that and then going on The Voice tour, the people that you are surrounded with are great people and that whole experience, meeting the fans that watch you on TV and vote for you, it’s just so cool to go on tour and meet the people that were supporting you. Adam is definitely one of my favorite people in the world. If you love Adam Levine, then I’m telling you that you love him for the right reasons. He’s an amazing person and working with him, he just made sure that we both knew when we go on stage. He made sure that I was 100% comfortable with that. He made sure the song choice was of my preference. He was just really nurturing,” she said.
Another artist she considers a mentor in the industry is Selena Gomez, whom she went on tour with as a front act. “I will say she has been an absolute pleasure to work with and be on tour with. I can’t think of another artist I would rather open for considering she’s very sweet and she has been a mentor to me throughout that whole touring process. She’s been a pleasure,” she said.
A self-admitted fan of metal music, Christina said people might be surprised to find out she listens to Metallica to get herself amped up before a performance. She also felt lucky to have performed for Jon Bon Jovi. “One performance that was a huge honor was I sang for Bon Jovi at a seminar and I sang his song ‘Living on a Prayer’ in front of him. It was quite the honor. He went up to the little pulpit because he won an award for something. When he accepted it he said, ‘I would just like to say amazing job to Christina Grimmie who did great justice to my song.’ So it was cool,” she shared.
Ayala Malls brings Christina Grimmie with three exclusive performances all over the metro. On October 4, Saturday, she will perform at Alabang Town Center at 4 pm and Glorietta at 7 pm, and on October 5, Sunday at Trinoma at 7 pm.
Celebrity