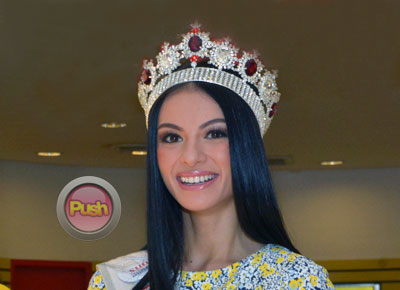 After winning the crown in the Miss World Philippines pageant last October 12, Valerie Weigmann said she is excited to prepare for the Miss World pageant to be held in London on December 14. The Fil-German host-actress said she never imagined winning in a beauty pageant even after joining Pinoy Big Brother Teen Edition back in 2008. “Actually no, I never imagined this (laughs). People would come up tome after PBB and tell me, ‘Val, ikaw perfect ka as a beauty queen. Wala ka bang balak?' Ako naman nung time na yun sinabi ko na wait muna kasi I had to learn Tagalog pa. Kaya nag-stop din ako. At saka I wanted to get to know the Philippines even more. I wanted to travel first and explore more. As a model, I also wanted to build my portfolio and other stuff. I told them to give me time to get even better and to find out who I really am at that time. Kasi bata pa ako nun eh. I needed the time to explore more I guess,” she shared during her visit to the Sun Cellular flagship store in Robinson’s Galleria mall in Ortigas city last October 21.

The 24-year-old beauty queen said she has managed to maintain friendships with her former PBB housemates even after they had finished their stint on the popular Kapamilya reality show. “Rona Libby is still a very close friend of mine and also Nikki Uysiuseng and Priscilla Navidad also,” she said. When asked about her former “ka-love team” inside the house, Val said they are also still friends. “Si Ejay Falcon we are on good terms naman but of course he's also busy in what he's doing now, being an artista he has a lot of shoots, a lot of rakets. So ako naman, siyempre I'm very busy na with the other projects, we would see each other sometimes in some events but not as often anymore as before,” she shared. When asked if she was willing to work with him in a project in the future, Val answered matter-of-factly, “Why not? I'm still open for anything that comes up. Let's just see what happens. I'm open for anything actually, whether it comes to hosting or acting I enjoy everything that I'm getting. Every opportunity that I see, let's just see what will come up to me I guess. I'm still open naman for hosting and acting,” she added.

Val has also been vocal of how her Eat Bulaga co-host Paolo Ballesteros encouraged her to join Miss World. “Yes he was part of it. It wasn't only him but he was also one of the first who also talked to me about beauty pageants in general and that he loves also Miss World. Especially after Megan Young's win, we saw also how amazing it is how much you can raise awareness of your personal beliefs and advocacies. Sabi niya, 'Val, since into charity ka naman, it's such a nice platform to raise awareness for your beliefs which I know you’re also very passionate about.' So I was thinking of that and I talked to some of the people from Eat Bulaga And pumayag din sila. They said, 'Kung yan ang gusto mo, go lang. We're also very proud of you, that you want to use your voice to raise awareness for those who cannot speak up for themselves.’ The whole experience with the show ang saya-saya. Kasi it was also one of the hardest segments to be in kasi of course you're exposed to a lot of people and a lot of sun but I didn't mind. I enjoyed every minute of it since it also helped me to be the person who I am now. I got more confident, I got stronger, I got street-wise. I learned a lot during the whole experience,” she explained.

Even though she is now busy with her duties as Miss World Philippines 2014, Val said she and Paolo regularly communicate. “We're still in touch. We're still texting. Paolo would give me advice, like even during the screening of Miss World he would give me advice like, 'Val, sa makeup mo iwasan mo yung mga sparkly sparkly eyeshadows kasi nakaka-mature,' mga ganun. Even beauty tricks and makeup transformation and I totally trust him. He's amazing. He's really good with makeup and the way he wants me also to be to always look good in pictures,” she admitted.

When asked about why he refers to her as his “asawa” on national television, Valerie did not seem bothered by the sign of affection and explained. “Kasi siyempre dahil sa segment naming na Ang Joke Ko sa show ‘di ba? It's one of the best segments before. And during that time I was about to start as one of the hosts so it's a great memory that we started together. We really got close during that time,” she said.