Empress Shuck says Ejay Falcon and Joseph Marco are not her ‘exes.’ 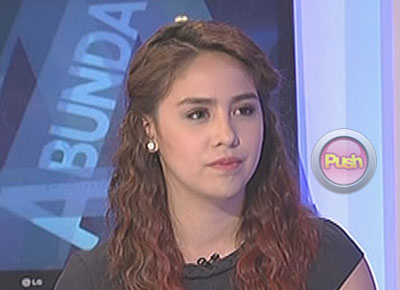 On Aquino and Abunda Tonight, Empress explained that she plays as herself in her upcoming movie Beauty in a Bottle. However, Empress in the movie, unlike the real Empress, is a mean girl.

Also, the actress said the Empress in the movie is very confident. In real life, she has insecurities and she shyly admitted that her thighs have always been her problem area. She said that she got her thighs from the German side of her family.

Empress recently went through “laser lipo” and Empress said she didn’t feel any pain during the two-hour surgery and only felt the pain after. Nonetheless, it was all worth it according to the Beauty in a Bottle actress because she’s very happy with the results.

Empress also broke free from her wholesome image when she did a sexy cover for a men’s magazine. Asked if it was hard doing a sexy cover, Empress said yes. “Ang hirap kasi child star ako, hindi sanay ang mga tao, natakot ako na baka hindi tanggapin ang new image.” In the end though, she decided to risk it.

Empress shared that her parents were very supportive when she did the cover. She also denies running away from home. What more, she says she didn’t have a relationship with either Ejay Falcon or Joseph Marco.