The actress is set to wed in the United States this winter season. 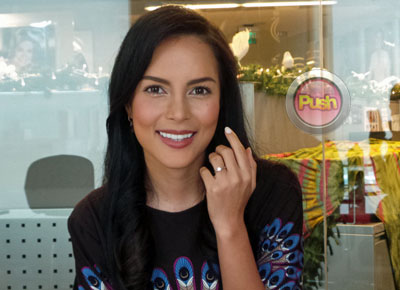 Actress Jewel Mische revealed today in an interview that she is getting married to her Scottish boyfriend, Alister. The couple will be wed in the United States in a winter wedding ceremony which according to the actress is their “dream wedding.” “It’s nothing grand and extravagant but it’s going to be simple with taste.” Jewel wants to keep the date of the wedding private as of the moment.  Her wedding gown will be designed by Francis Libiran.
The actress revealed that she has been engaged for a year now. “He proposed last Christmas,” she shared. “He’s a Christian [so is] his family,” Jewel added.  After their wedding, they will be traveling to Europe and are planning to go on a road trip in the US  as well. They will also be having a wedding here in the Philippines for their friends and family in the country by 2015.
Jewel has spent time with Alister’s family after she graduated from college last March. She shared that she has really gotten really close to her fiancé’s family. "We're close--very much. After I graduated from music college last March, lumipad ako doon and I stayed there for six months. I really invested time with his family and friends. I love them so much and they love me so much. I am very much accepted, very much cherished and acknowledged."
Besides their wedding day, Jewel revealed that she is also looking forward to their first kiss. According to Jewel, they have not kissed yet. “It’s so nice, it’s so different because we’re so in love with each other without being physically intimate and yet physically attracted to each other. It’s different.”
Celebrity