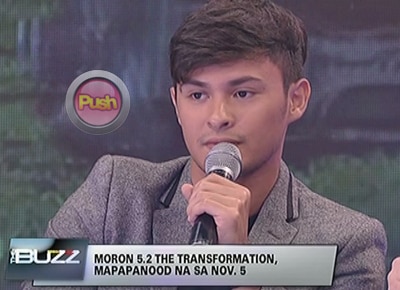 Matteo Guidicelli allayed fans' fears that he has irked his girlfriend Sarah Geronimo's mother, Divine, because of his telling responses on questions about them in a recent press conference.
Matteo during a live interview with The Buzz shared that he thinks Mommy Divine hadn't been offended by the interview.
“I really don’t know. They asked me a question sa isang press con and I just answered it the best way I could without saying anything extra. But nobody was offended I think so okay naman lahat,” he said.
Has he talked about this new issue with his Mahal?
“Yeah, it passed by. But everything is fine. Promise, okay kami," said the Moron 5.2 star.
Matteo was recently queried by the press about how his relationship was with the Pop Star Princess after they made it public some months ago. Reports have it that Mommy Divine got stricter to both of them because of it.
During an earlier guesting, the actor was asked whether it is true that Sarah’s mother has become stricter after they made their relationship public.
“With Sarah and I, whatever her values or whatever decisions she and I make, we have to adjust to it and that’s our personal decision,” he said at the time.
The actor-athlete whose first dip on comedy has got him working with the leagues of serial jokers like Billy Crawford and Luis Manzano. This has made him the butt end of their antics and among the subjects that they are teasing him about was his rumored lack of sex life.
A topic which Matteo just took in stride when he said, "“That’s part of life. In the Bible, it says you can only do that after marriage. But all of us make mistakes. All of us have experiences so we’ll try to be better in our future relationships and all that stuff so it’s possible. If you really have the mindset, I guess.”
But with or without an intimate affair, Matteo made it clear that he wants Sarah to be his "last" girl.
“The reason why I am still here with her and always fighting for her is because I want her to be my last already. Hopefully. We’ll see. We can never tell. Only the Lord knows,” he said.
Recall that it was only last June when the singer-actress made their relationship public after being spotted together several times.
Celebrity