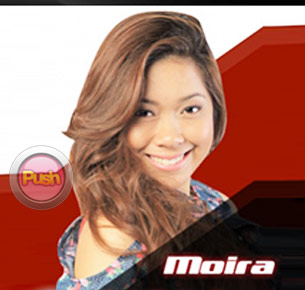 You've probably heard her voice in popular commercials like McDonald's “Hooray for Today” or Surf's “Pinalaki.” Now singer-songwriter Moira dela Torre is ready to step into the limelight with the launch of her self-titled debut album Moira under Ivory records.
“It all started when they needed a peg for McDonald’s, and then they saw my YouTube account and then they called me up and said they wanted me and then nagtuloy-tuloy na. Siguro I've sung for 15 to 20 commercials already for the past two years. I was okay with not being recognized in public actually kasi mahiyain kasi ako. So just being in the studio and not having to make spiels parang okay ako, at peace ako kasi comfort zone ko yun. Ngayon parang I'm really stepping out of my comfort zone. I feel very grateful. It's really a dream come true because I've been writing songs since I was 13. Finally it's in an album na and people get to hear it. It's an all-original album. All songs were written by me. It has six songs and it's a compilation of my very first songs. These songs are very personal, very kilig and very kiddie but there are also songs that are just plainly love songs,” she shared.
The 20-year-old was part of Team Apl on The Voice of the Philippines last year which was an unforgettable experience for her. “I've always been a solo artist and singing for church. I joined The Voice of the Philippines during their first season. I made it to the battle round. Apl was my mentor. I learned so much from the coaches, dun ko na-experience yung pinaka-unang tikim ko ng showbiz. Hindi kong inakalang ganun pala ka-crazy yung buhay show business. I learned from the people there and I gained so many friends after. I learned a lot from Apl, like family always comes first. I learned that hard work always pays off,” she recalled.
Unknown to many, Moira said she had to overcome anorexia before discovering her love for composing songs while growing up in Olongapo City. “I grew up singing in a choir with my whole family. Methodist kasi yung mother's side ko. So I sang in choir every Christmas, ganun. When I was 12, I became anorexic so kinailangan ko ng outlet kasi wala akong magawa eh. I was diagnosed when I was 12. I didn't eat anything at all for six to eight months. I didn't tell anyone until two years after so I overcame it. My mom went in one time and hindi ako makatulog kasi I was too hungry. So my mom started praying for me and she was holding my hip joint and it was so deep na and she was crying. She said, 'Lord, just heal her from this.' when I woke up, I then decided I was going to eat. As in ang dami kong tinatago noon to the point that I just started writing songs. And that became my passion. It was what I wanted to do,” she shared.
Moira says her musical influences include Sara Bareilles, Adele, Taylor Swift, Colbie Calliat, and local artists Yeng Constantino, KZ Tandingan, and Bamboo. One day she says she hopes to get the chance to work with other singers she admires. “Dream ko sana maka-duet si John Mayer pero sa Philippines si coach Bamboo. I also want to do stuff with coach Apl. I want to collaborate with Yeng and my favorite songwriter in the Philippines which is Gloc-9 and Ebe Dancel. I was in a songwriting camp last year and Ebe was my mentor. That was the time also that Gloc-9 released a song called 'Magdalena' and I remember being so amazed,” she said. She also recently cut a duet track with Sam Milby for her album. “He's a friend of mine and we're under the same management. He's one of those people who encouraged me to really pursue a career in music,” she added.
After becoming opening act for other performers like Yeng Constantino, Markki Stroem and Thor, Moira said she is ready for a full-on career in music along with all the intrigues that may come with it. “Siguro the past two years madaming intriga din in my family and with my friends there were issues in the past that I think prepared me for what's to come. Very sheltered kasi akong bata. I grew up in church being a pastor's kid so parang yung mga konting chismis lang lagi akong nasasaktan agad. And then when I moved to Manila from Olongapo ibang culture na so medyo nasanay na ako. Petty lang naman yung mga naranasan ko,” she shared. The Music Production major from the College of St. Benilde in Manila is also happy with her two-year relationship with her boyfriend who goes to the same church as her in Victory Fellowship in Makati city.
Moira Dela Torre's album Moira is now available in major record stores nationwide and can also be downloaded through iTunes, Spotify, Spinnr.ph and Deezer.
Celebrity