‘The Imaginarium’ runs from October 28 to 31 at the PETA Theater Center. 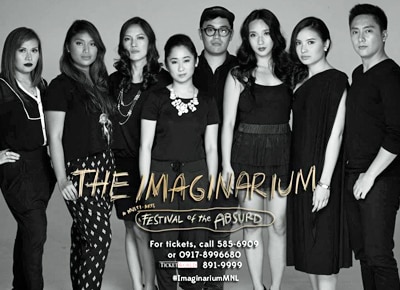 Performance arts group The Sandbox Creative hopes to bring local indie talents into the spotlight with The Imaginarium—a multi-arts festival of the absurd. The Imaginarium’s lineup of performances, presentations, and collaborations features various media, including film, fashion, dance, visual arts, improve, spoken word, music, food and beverage, and theater.
Sandbox Creative’s artistic director Toff de Venecia believes that there are loads of creative people who “aren’t given opportunities to not just shine but also just to show their work, and work with other people. This I guess is the perfect platform for them to do that.”
Apart from being a venue for newer talents, the festival also hopes to cater to the “global shift” towards artistic expression and experimentation. “We believe the game is changing,” Toff shared. “There’s a new generation of cultural connoisseurs and practitioners who aren’t afraid of stepping outside of the box anymore and being unconventional or different. They’re about celebrating and championing what’s new and creative.”
The multi-arts festival also stems from their full awareness of the type of market that their company has been tapping since its inception. Their market is composed of mostly students and young professionals who are exposed to what’s happening in other parts of the world, primarily because of travel, word-of-mouth, the Internet, and social media.
“It’s no longer about being particularistic to the genre,but creating an overall experience, a meaningful experience.”
The Imaginarium, a multi-arts festival of the absurd, will cap off The Sandbox Collective’s 2014 season before it returns in 2015. The festival will run for four consecutive days at the PETA Theater Center, No. 5 Eymard Drive, New Manila from October 28 to 31.
Celebrity