Jungee Marcelo on Daniel Padilla: 'Hopefully people can see him as a blessing to the industry.' 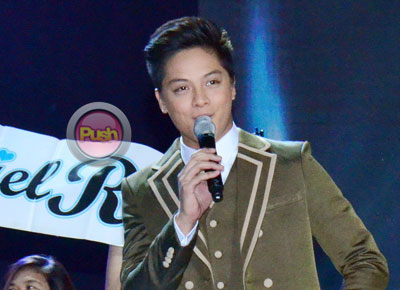 Composer Jungee Marcelo said he is not even slightly offended by the influx of parody versions of his 2013 Himig Handog P-Pop Love Song entry “Nasa ‘yo Na Ang Lahat.” In fact, Marcelo is flattered that his song has been sung in K-Pop and even what many call as jeje version.
"Well you know what if anything lagi na lang napapangiti kasi when you hear Araneta Coliseum filled with screaming teenagers and kids singing your song in unison from verse to chorus. That is flattering," he said in an exclusive interview with Push.com.ph recently. Jungee was referring to the concert of the song's interpreter Daniel Padilla months ago.
He added, "If people create different versions of it, that is flattering. I never take it negatively but I'm always quick to defend Daniel because the boy can really sing. This boy is a fantastic artist. I hope people could see how good this kid is."
The man behind the 2014 P-Pop Love Song Hit “Pumapagibig” shared that Daniel learned only took 45 minutes to prepare and record his song. "He learned the song in 15 minutes, recorded it in 30 minutes. That's 45 minutes," he said.
Despite the song's domination of the airwaves, many still didn't take the Teen King seriously as far as being a musician is concerned. To this, Jungee stressed, "That kid, without even trying, has a musicality [like] any singer that I know. And I'm vouching for him. Please quote me on that, this kid can sing and I hope people can get off his back because he is one of the best."
Jungee, who only first worked with Daniel in producing “Nasa ‘yo Na Ang Lahat,” considers the Teen King as "one of the most professional artists I have ever worked with." He quickly continued, "At bata pa siya. So kapag pinagbutihan at pinagigihan niya ang kanyang pagkanta, lilipad 'yan ng pagkataas-taas. Hindi lang lipad sa pagsikat kundi lipad sa kanyang venture to be a musician."
Jungee has written hit songs for artists like Gary Valenciano's “Hataw Na” and “Sayaweh” as well as Zia Quizon's “Ako Na lang,” among others. But he was very firm in saying that the "biggest hit of his lifetime" is “Nasa ‘yo Na Ang Lahat.”
Admitting that the song opened so many doors for him and gave him another shot at stardom, Jungee shared that he would be more than willing to share the mic again with Daniel as, according to him, the latter was there for him when he needed him. "Definitely I would want to work with him. In fact, I would want to sit down with him and pick his brains then tell him," he underscored.
Moreover, he said he would want would want to create more songs for people like him. He added, "In fact I would be willing to produce an album for him kung papayagan. 'Yun lang ganon ko siya kagustong artist.
"I am not just saying that. He is an artist that should be given more respect. Take it from someone who’s been in the industry for the longest time. I have nothing bad to say to him. He's all a blessing to me and hopefully people can see him as a blessing to the industry," he supplied. "Alisin na 'yung kanyang pagka-star because siya mismo he plays good bass."
Celebrity