Toni Gonzaga talks about her concert ‘Celestine’ and being called the new Concert Queen. 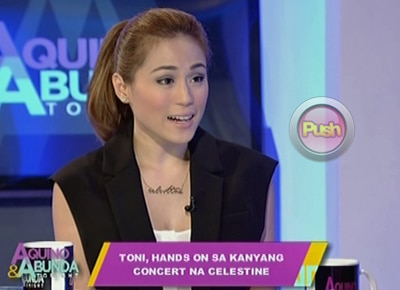 On Aquino and Abunda Tonight, Toni Gonzaga reacted to being called the new Concert Queen. Toni said she’d rather have her own title than be the second Concert Queen. She further explained that there is only one Concert Queen and that is Pops Fernandez, who happens to be one of her producers for her 15th anniversary concert Celestine.
Toni also shared how she admires Paolo Valenciano’s vision for her concert. Paolo is directing Celestine and Toni said she will not be doing the usual Beyonce and Katy Perry productions. “Paolo capitalized on my musicality and personality.” Toni said there will be a lot of OPM songs and she will be doing something for the first time. Toni will be playing the piano and there will be a “tahimik na prod,” where she will sing a song that she herself composed.
Toni advised concertgoers to be prepared to get wet. The concert, she said, is going to be very interactive. “From start to finish, it’s going to be a party concert.” Another must-see is Toni’s showdown with her wacky sister Alex.
Asked whether she thinks her beau Director Paul Soriano will stage a proposal during her concert, Toni said, “Parang wala naman akong nararamdaman.”
Celebrity