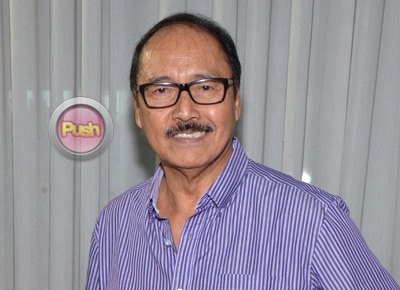 With his award-winning Cinemalaya film Hari ng Tondo (Where I Am King) set for nationwide release, veteran actor Robert Arevalo said he was immediately intrigued by his role as a family patriarch who grows up in the slums of Tondo and now lives in a posh Makati village. In the film, Robert has two children (played by Audie Gemora and Ali Sotto), a son-in-law (Eric Quizon), and grandchildren (Cris Villonco and Rafa Siguion-Reyena). When his businesses and assets need to be sold off, he decides to move back into a building he owns in Tondo, along with his apos whom he wants to teach more about the realities of life.
“Nung binasa ko yung script I thought it had the potential to be a good film at saka technically it was a very good role kasi nga title role. I just read the script and I thought I would be up to the task of giving flesh to the character. Nakaka-relate ako sa character ko sa pagiging lolo. I am a very loving lolo. Tatlo apo ko so madaling madali sa akin yung magmahal ng apo. Siguro dahil sanay na sanay naman ako lalo na sa television nung araw sa channel five at channel two nun when I was doing Balintataw and guest appearances and all that. Marami akong mga lead roles dun for television,” he told Push.
After more than 50 years in the industry, Robert said he never expected to become a lead star at 76 years old. “Kaya nga eh, hindi ko inexpect kaya it was most welcome for me. Well si Eddie Garcia talo ako hanggang ngayon at 80 plus (laughs),” he admitted.
One of the biggest challenges for Robert during filming was shooting at an actual tenement housing in the heart of Tondo, Manila. “Ang pinaka-challenging dito yung working conditions dahil mainit na mainit nung panahon na yun at saka yung long hours at saka I was in almost every scene, konti lang yung wala ako. Hindi na ako sanay sa ganun (laughs). Nung bata ako meron akong experience na ganun ng konti (laughs)” he added.
Hari ng Tondo also boasts of an ensemble which make up the colorful residents of Tondo. They include Liza Lorena, Rez Cortez, Lawrence Martinez, Gian Magdangal, and Ciara Sotto among others. Robert said it was a pleasure to be among such talented thespians. “Lahat sila actually enjoy kasama. Hindi na kami nag-workshop to be able to get used to each other. Masyang kasama lahat, sila Aiza Seguerra, sila Carlos Canlas, sila Rafa Siguion-Reyna at si Cris Villonco na nakasama ko sa isang play before that so wala ng problema with Cris,” he shared.
Robert is also not new to the stringent ways of director Carlos Siguion-Reyna. “I have worked with him before so I know his working style. Sabi ko nga, hindi problema sa akin yung maraming takes at maraming rehearsal because it affords the actor more opportunities to improve his craft, his performance,” he said.
After he won Best Actor and the film won Special Jury Prize during the Cinemalaya awards night, Robert said he was not expecting anything. “Tuwang tuwa ako and you find out that you'll never really get used to awards. It will always be a source of great joy,” he admitted.
As an actor, he said he wants to be able to do more pivotal roles. “Wala akong naiisip na any particular dream role in so far as kung anong klase yung character or ano. Basta my dream, which has been fulfilled already, with Hari ng Tondo, is to do another role where I'm the principal actor and where a lot will depend on your performance, a lot will depend on your success or failure as an actor for the success of the film, yung ganun,” he explained.
If he were to give one piece of advice to the younger generation of actors who want an enduring career in showbiz, Robert said continually striving for excellence is the right path. “Basta pagbutihin niyo lang ng pagbutihin whatever job is at hand, just keep doing your best and pag magaling ka talaga and your talented enough, tuloy tuloy na yun. Hindi na mawawala yun,” he said.
When not busy with work, the Hari ng Tondo star said he is just like any regular active senior citizen. “Mahilig ako sa sports. Hanggang ngayon even at my age I still jog a little. Of course I got slower and slower, I used to be quite fast (laughs). Dati araw araw tapos naging three or four times a week, ngayon mga twice a week na lang. Pero as much as possible I try to put in some form of exercise,” he shared.
Celebrity