Darren Espanto says he is overwhelmed by the amount of support he received for his first solo concert. 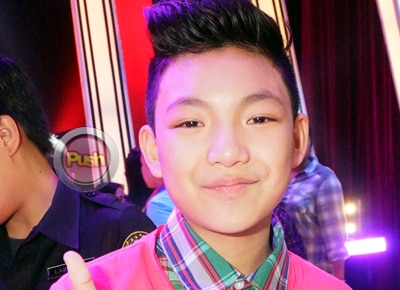 The Voice Kids of the Philippines finalist Darren Espanto is set to hold his very first solo concert at Music Museum on October 4, 2014 titled The Total Performer Concert. Darren admitted that he is really ecstatic about his upcoming concert. "I feel really excited and nervous at the same time," he said.
Darren shared that he will be performing new songs for his fans. "More dancing ‘to, something that you guys haven't seen yet on The Voice." He also relayed that he will be singing some hit songs of the King of Pop and some fresh R&B tracks. "[I'm going to sing] some Michael Jackson songs and the newest pop and R&B songs."
The young singer said that he was really surprised when he learned that the tickets for his concert were already sold out. "I feel blessed and overwhelmed because I did not expect his reaction from people." On his message for his supporters, he said, "Thank you very much. Your love and support inspire me a lot. I will forever remain grateful to all of you. God bless."
Darren hit the number 1 and the number 2 spot on iTunes last month with his cover singles "One Moment In Time" and "Somebody To Love" respectively. He was also invited to  Jed Madela's concert last September. Jed in his interviews expressed his support for Darren’s talent. “Magaling silang apat. Everybody had their time to shine and everybody who watched them had their choices. Ako ang naging choice ko si Darren. It started from there. Talagang pinanindigan ko ‘yung choice ko. Bilib ako sa bata eh,” Jed said.
Darren joined the Canadian reality show The Next Star before joining The Voice Kids Ph. He also joined other singing competitions like the Pinoy Singing Sensation where he became the city champion in Calgary, Canada in 2011.
Darren’s upcoming shows also include the Kapit Bisig Ecija: Benefit Concert at Araullo University, Cabanatuan City in October 9, 2014. He will also performing at FSUU Gymnasium, J.C. Aquino Ave., Butuan City in October 19 for his Darren Live in Butuan concert. He will be flying to New York City in October 24 for the TOFA-NY Awards.
Celebrity