Kris shared that it was child star Ryzza Mae who told her about son Bimby's new girlfriend. 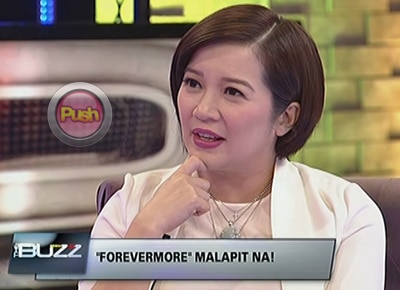 It seems that Bimby Yap beat his mother in the love department as Queen of All Media Kris Aquino revealed that her son has a new girlfriend.
Kris shared during the Sunday episode of The Buzz that it was child star Ryzza Mae Dizon who told her about it.
"Kasi magka-text sila ni Ryzza, so si Ryzza finorward sa 'kin ang buong text exchange nila ni Bimb," she began.
"Sabi sa kanya ni Bimb 'Ryzza I have a new girlfriend her name is Ivana.' So sinagot ni Ryzza, 'I also have a Jacob,'" she added.
After which, The Buzz host revealed that Ryzza asked for her ex-husband James Yap's number.
"Hiningi ni Ryzza sa 'kin sabi niya 'Tita Kris pwede po bang mahingi ang number ni Dad? si James Yap.' Sabi ko 'Bakit?' Sasabihan daw kasi niya dahil sinabi sa kanya ni Dad 'Tell me anytime kung may girlfriend dahil gusto kita,'" said Kris.
The two child stars who have worked in the 2013 Metro Manila Film Festival entry My Little Bossings have jokingly called each other boyfriend and girlfriend, much to Kris' amusement.
Meanwhile, to former actress Laarni Enriquez's comment that she would always be her son Jake Ejercito's true love, Kris echoed that she is certain that she would be Bimby's true love as well.
But this is not to say that she believes that no woman would be good enough for her second son in the future. But her sole requirement for Bimby's future girlfriend is for her to love him and his older brother Josh unconditionally.
Celebrity