Rico Blanco admits he is in a relationship

The usually tightlipped Rico Blanco says that he is currently in a relationship with a dermatologist. 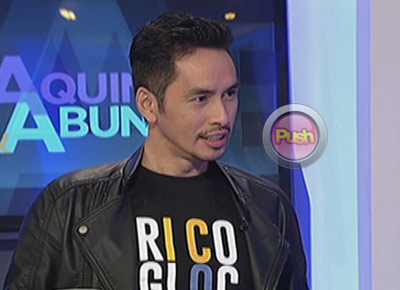 On Aquino and Abunda Tonight, Pinoy rock icon Rico Blanco talked about his Icon concert with Yeng Constantino and Gloc-9 at the Big Dome on November 21.

Rico revealed that he is “enjoying being an independent artist.”  Rico also said he would welcome a reunion concert with his former group Rivermaya, one of the most renowned Filipino rock bands of all time.

Host Kris Aquino revealed that she and Rico used to be classmates and even seatmates in a Political Communications class at the Ateneo University. Asked how he remembers Kris back then, Rico said, “Kris always had an opinion. Even if it was just an ordinary lecture, she would butt in all the time.” For her part, Kris remembered Rico as being smart. She shared that he was two to three years younger than all of them in class because he was an accelerated student.

Rico also admitted being in a one-year relationship with a “dermatologist.”