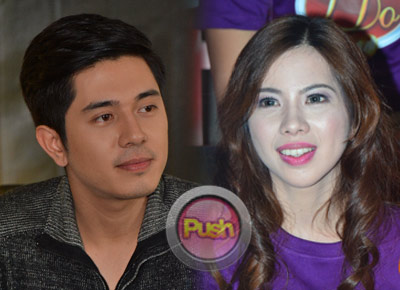 It seems that Paulo Avelino is still keen on winning KC Concepcion’s heart as shown by the actress’ recent Instagram post where the former was seen playing the guitar inside the latter’s hospital room where she was confined due to dengue.
But even if the two are mum on the real score between them, Paulo’s sister Honey Avelino has expressed her desire to meet the Ikaw Lamang actress. Honey admitted this in an interview during the I Do press conference where she happens to be part of one of the Top 5 couples.
“Si KC naman, she’s very pretty, mabait. I haven’t met her personally yet. I want to get to know her more if ever Paulo really wants her and they want to be together in the future, probably. Why not?” Honey said.
Despite intense prodding though, Honey failed to reveal anything more than what the public already knows about the KC-Paulo romance because, according to her, his brother isn't opening up about it to their family as well.
In fact, Paulo apparently didn't bring KC to meet his family during their publicized Baguio sojourn some months back.
Seeing that she herself is part of a marriage-related reality show, Honey was asked if she sees her younger brother eventually tying the knot.
"Settling down? In my opinion ngayon, I see him settling down pero siguro later kasi bata pa siya and he had a kid early rin so I think ngayon he wants to be more careful, more prepared," she said. Paulo has a son with his former girlfriend LJ Reyes named Aki.
She added, "I can see him naman as a family guy kasi sa amin naman sabi ko nga sa siblings nga maalaga naman siya eh pero I’m not sure when. Probably not too soon."
Would she want him to end up with someone from showbiz or not? "Ako basta kung saan siya masaya, lahat naman kaming family we will support him. Like whatever happens in his life we’re always there at his back. Alam naman niya na we’re just here whenever he needs us. Andito kami and he’s not alone. Whatever choice he wants we respect that," Honey said.
Honey, who is part of I Do together with boyfriend Emil, openly spoke about wanting to join showbiz after the contest. She even shared in previous reports that she hopes to try hosting. But aside from that, Honey is also open to try drama acting like what her brother is best known for.
“Drama, siguro 'pag ma-pagaralan, 'pag may workshops, 'pag gumaling. Kasi si Paulo ang galing niya. We had workshops recently, doon ko nalaman na ang iksi-iksi [ng script] ang hirap, tapos kailangan mo i-project 'yung todo iyak, kaya ang laki ng respect ko sa kapatid ko," she explained about the Sana Bukas Pa Ang Kahapon star."Kasi when when we watch [Paulo’s teleserye] kasi 'pag kilala mo 'di mo maseryoso eh. Pero when I tried it na, when I placed myself in his shoes during the workshop, iba, iba pala talaga, ang hirap."
Even if she admitted to not being close to Paulo these days, Honey revealed that he actually gave her some advice about the industry, should she really pursue it.
"For him, of course, nag-advise rin siya. Kasi he’s been through a lot. He said, 'Honey, do you really want it? Kasi if you want it, you have to be sure. Kasi sa ngayon okay 'yan, afterwards, kailangan gustuhin mo kasi marami yan, hindi lang 'yan basta-basta all happy-happy,'" she recalled his advice.
Honey, for her part, acknowledged her younger brother's advice and concern for her saying that "Siyempre, people with judge you, lalo na reality show, di ba, syempre iba-iba opinions ng tao, kung ayaw mo or gusto mo, hindi mo mapigilan 'yan.
"'So, if you want it, then all good, kasi di ba it comes with what you’re entering eh.' 'Yun nga, madalas niyang sabihin," she echoed.
Celebrity